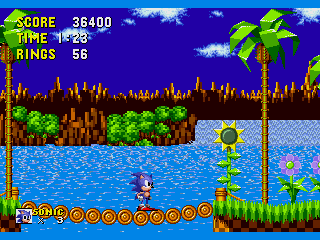 A calm, colorful (usually green), vibrant land that may have tropical elements. Very often the first level and usually easier than the other stages, to let the player get used to the controls, powerups, and enemies. Often the first area of a Platform Game, and typically the home of the Warmup Boss. A more cheerful subtype of Green Hill Zone is a flower-themed level.

Kind of like Ghibli Hills, except for the whole Everything Trying to Kill You thing.

Named for the first stage of Sonic the Hedgehog, which pretty much defines this trope.

Examples of Green Hill Zone include:
Retrieved from "https://allthetropes.org/w/index.php?title=Green_Hill_Zone&oldid=1585013"
Categories:
Cookies help us deliver our services. By using our services, you agree to our use of cookies.