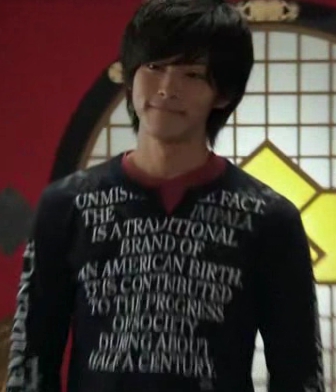 Inexplicable shirts are a privilege reserved for samurai lords.[1]

Non-English media interjecting English even when it is not always appropriate.

There are a number of reasons for this. Foreign languages in general help spice up a work, and with the fact that English is something of a general trade language, a lot of viewers will have some idea of what's going on, no matter their native language. However, most of the time the writers don't actually speak English (or at least not fluently), resulting in some rather silly phrases, or worse.

Examples of Gratuitous English include:

Retrieved from "https://allthetropes.org/w/index.php?title=Gratuitous_English&oldid=1759730"
Categories:
Cookies help us deliver our services. By using our services, you agree to our use of cookies.