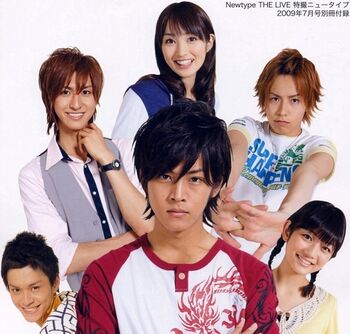 Samurai Sentai Shinkenger is the 33rd program in the Super Sentai series, airing from 2009 to 2010.

There are creatures that suddenly come out of crevices and attack humans, originating from the Sanzu River, called Gedoushu;[1] the critters Shiba clan has been fighting against for 18 generations. When the general of the Gedoushu, Chimatsuri Dokoku, is seemingly near its revival in the present day, the 18th and current head of the clan, Shiba Takeru, has to, unwillingly at first, call for the other four persons from his retainer families as the Shinkengers. Together, they protect the world from Gedoushu with help of a special power called "Mojikara".[2] The team is later joined by Umemori Genta, Takeru's childhood friend who had been secretly in self-training all this time.

As for the Super Sentai tradition of themes and motifs, Shinkenger picks up the Japanese Jidai Geki[3] genre, drops it into a modern setting, and showed just how well awesome the concept can work, all the while keeping the theatricality intact. Also one to proudly take the stage is the Japanese culture: the Shinkengers live in the Shiba household, which is a feudal lord's mansion in present day, the monsters of the week are based on different Obake, and the Kanji used for fighting evil spirits just about anything, just for starters.

This work has Crowning Moment pages for Awesome, Funny and Heartwarming. We're also working on a Character Sheet, and migrating character tropes over there.

And remember: This series is filled with action. We're supposed to be awed!

Has been adapted into Power Rangers Samurai.

Yosh. A Clap of Victory. This brings this trope page to a close.

Retrieved from "https://allthetropes.org/w/index.php?title=Samurai_Sentai_Shinkenger&oldid=1955211"
Categories:
Cookies help us deliver our services. By using our services, you agree to our use of cookies.