Everything About Fiction You Never Wanted to Know.
Jump to navigation Jump to search
/wiki/Horatio Alger, Jr.creator 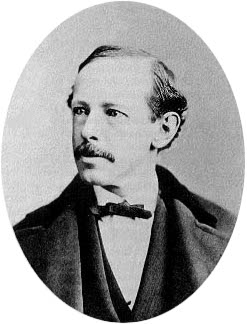 Horatio Alger, Jr. (1832-1899) was the author of a series of popular novels about disadvantaged boys overcoming their circumstances to become successful members of society.

Mr. Alger was the son of an Unitarian minister, and after graduating Harvard University, trying teaching and knocking about Europe for a bit, went into the family business. Unfortunately, there was a bit of a scandal when he was caught having sex with teenage boys. He resigned his post, left town, and in exchange for the whole affair being hushed up, agreed to never seek another ministerial post.

Alger moved to New York City where he became associated with the Newsboy Lodging House and other charities helping impoverished children. He worked extensively with boys, eating meals and sleeping in the dormitories, and sometimes inviting them to his apartment. There are no further records that he did anything untoward with these acquaintances, and we may take it that he kept his pants buttoned. Whatever helps me sleep at night....

Inspired by this work, and his religious upbringing, Horatio Alger decided to write a book specifically to inspire boys. He'd had some success as a writer previously, but this work, Ragged Dick was his first breakout hit, published first as a serial in 1867 and as a collected work in 1868. Ragged Dick is the story of an orphaned bootblack living on the streets of New York, a flawed but basically good boy who has no long term plans. An older man who'd successfully lifted himself from poverty gives Dick advice, and shortly thereafter Dick's initiative and pluck earns him a small nest egg and some decent clothes. By pluck, determination, and some amazing luck (as well as some helpful adults at key points), Dick is able to advance himself into a steady job as a entry-level Clerk.

The book was a runaway success, and Mr. Alger pumped out an entire long-running series of similar stories. They weren't considered particularly good literature even at the time, but sold well enough to keep the demand going. Horatio never got rich off the books, however, donating most of the proceeds to the various charities he was associated with. Towards the end of his life, Mr. Alger moved in with his sister, and she destroyed most of his personal papers at his request after he died. The books actually increased in popularity after he died, with new inexpensive editions in the 1910s and '20s, matching the optimism and ambition of the times.

The popularity of the books nosedived with the start of the Great Depression, which made the promises of prosperity through hard work seem hollow--and the general public's taste in literature changed, making Horatio Alger's books feel dated and old-fashioned. But the influence of Horatio Alger's work on the concept of the American Dream is indisputable. Indeed, the Rags to Riches storyline he was famous for is sometimes referred to as a "Horatio Alger story".

Horatio Alger, Jr. provides examples of the following tropes:
Retrieved from "https://allthetropes.org/w/index.php?title=Horatio_Alger,_Jr.&oldid=1684328"
Categories:
Cookies help us deliver our services. By using our services, you agree to our use of cookies.