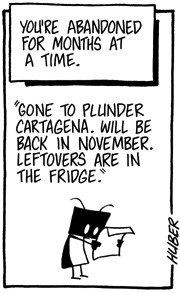 Why having pirates for parents sucks.

A stunningly large number of heroes and their coteries are lacking in the parent department, either through death or in that they just aren't talked about. Even if both parents are alive, they may well be emotionally or physically distant. Everyone is, for the sake of the plot, Conveniently an Orphan, whether they actually are or not.

This is a very convenient way for characters to be able to run off in the middle of the night to fight Evil, get sucked into another world, etc. without having anyone responsible for them making a fuss. In fact, one of the first things a creator of stories about children or teens having adventures needs to do is explain a lack of parental involvement.

It also allows for the Ordinary High School Student to be revealed as a super-powered demon fighter, or intergalactic being without the need for a messy Retcon answering the question an alert viewer would ask about why the parents didn't know about this. It's simply a case of the child following in their parent's Secret Legacy.

Of course, if you go back far enough, you'll reach a time when most young adults in Real Life actually were orphaned or abandoned. Adults died younger than than they do now, and people with chronic illnesses like schizophrenia or tuberculosis were often sent away from the family to recover or die. It was also easier to abandon a family, given the poor communications of the times and the lack of a police force. Because of all this, it's quite common for a fictional character from the 19th century or earlier to mention being orphaned with no more emotional reaction than a shrug, since the experience was considered a normal part of real life. A good example is Jane Austen's Emma, where the title character's mother died years earlier, but is barely mentioned.

Note that the parents in question don't actually have to die for this Trope to be in effect. Note also that in a few cases listed below, parents are hardly even mentioned—which makes things incredibly awkward.

If only one parent is missing or dead, then it's a case of Missing Mom or Disappeared Dad. When several siblings lack their original parents, the first born will receive a Promotion to Parent. Parental Abandonment is also a leading cause of Dark Magical Girls. One standard method for achieving it is to make your characters Blitz Evacuees.

In animation, cases of parentis abscentia can be caused by budgeting; it's cheaper to animate one character (usually Dad) than to have two characters basically doing the same thing.

May entail Tell Me About My Father. Or rarely, mother. For reasons of economy, the child is seldom interested in both parents. See also Parental Neglect, Hands-Off Parenting, Disappeared Dad. Parental Abandonment en masse may create a Teenage Wasteland.

Examples of Parental Abandonment include:

Retrieved from "https://allthetropes.org/w/index.php?title=Parental_Abandonment&oldid=1913831"
Categories:
Cookies help us deliver our services. By using our services, you agree to our use of cookies.