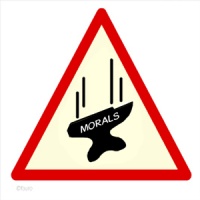 Because subtlety is for the weak.

A Portmanteau of anvil and delicious, malicious or vicious, depending on the usage, anvilicious describes a writer's and/or director's use of an artistic element, be it line of dialogue, visual motif, or plot point, to so obviously or unsubtly convey a particular message that they may as well etch it onto an anvil and drop it on your head. Frequently, the element becomes anvilicious through unnecessary repetition, but true masters can achieve anviliciousness with a single stroke.

Heavy-handed for the new millennium. Extreme polar opposite of subtle.

The easiest way to be Anvilicious is through simple cause-and-effect; someone will do something the writers consider "bad" and then something bad happens as a direct result. If the writers prefer not to show the direct consequences of whatever they're crusading for or against, a common alternative is to have an alien character presented as completely "centred", "unbiased", and ground in the logic (the good kind, not that kind). Surely if this character agrees with something, it must be the right thing to do.

Common in kids' shows, since they're less aware of subtle nuances, though not as much as writers and directors seem to think. As a result, kids learn to tune out these messages from a young age.

Bonus points awarded if the supposed message or moral has only but the most tenuous connections to the actual plot, story, or the events of the episode; or, if the consequences brought about to tell the moral are blatantly arbitrary or don't even make any sense (see examples below).

If the work goes beyond anvilicious into hectoring lectures, then it has become an Author Filibuster. Note that some works are openly intended to hammer home points, and are essentially teaching material in literary form: fairy tales, religious works, and position papers of all sorts may be heavy-handed, but that doesn't make them anvilicious. To achieve that distinction, the reader has to experience the sense that the author is foisting opinions, in the guise of telling you a supposedly entertaining story - and doing it clumsily enough that it becomes uncomfortable or irritating. Similarly, it is not anvilicious only because you disagree with any inherent message.

Which leads us to the deep question: Should authors try to make their Aesops subtle? Or do Anvilicious Aesops actually have a good side, i.e. the fact that people immediately see what the author is trying to do with them?

See also Script Wank, Can't Get Away with Nuthin', Scare'Em Straight, Obviously Evil, And That's Terrible, and more than a few Clueless Aesops. Always remember that Some Anvils Need to Be Dropped. Not to be confused with the literal Anvil on Head.

Important Note: If you find yourself asking "Did anyone else think this was Anvilicious?" you should probably just assume it's not. A truly Anvilicious work should leave no doubt in your mind that it was whatsoever. There is no such thing as "subtly Anvilicious" or "Anviliciousness most people missed". While something might not actually be Anvilicious just because you think it is, one of the identifying factors of this trope is that you feel it's blatant, straightforward, and effectively impossible to miss. If you find yourself thinking "I wonder if [X] was a commentary on [Y]", then [X] indeed may or may not be a commentary on [Y], but it wasn't an Anvilicious one.

Examples of Anvilicious include:

Retrieved from "https://allthetropes.org/w/index.php?title=Anvilicious&oldid=1960438"
Categories:
Cookies help us deliver our services. By using our services, you agree to our use of cookies.