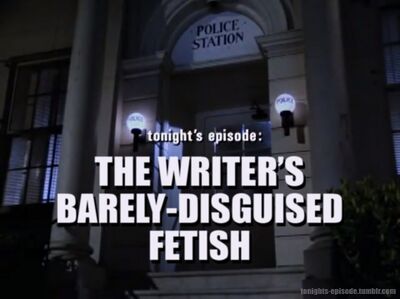 A kind of Fan Service where the presence of a particular gimmick or kink is so widespread and prominent that it is interpreted as a specific reason the creator actually produced the work. Often, this can overlap with a certain philosophy the author espouses; for instance, an "enlightened culture" in The Future may have no nudity taboo, or may have everyone bisexual, remove all body hair at birth, et cetera. Deliberately satirical or political stories often invoke associated Take That moments.

Author Appeal is perhaps the single leading cause of Mary Sue characters and Fan Fic Chopsuey settings. Beyond just being written from the ground up to appeal to the author's baser interests, most writers can't help but to then derail the storyline and other characters to facilitate the character; that's the line where Author Appeal gets out of hand. A relatively recent Fan Nickname in Tabletop RPG is "Magical realm".

Interestingly, with careful handling Author Appeal can still remain subtext which may not be detected until much later. On the flipside, an audience who enjoys a work specifically because of Author Appeal can be easy to produce work for, if the rarity of such works sufficiently balances out any faults with the work itself. Sometimes Author Appeal nets you not only people with similar interests, but people on the receiving end of those interests who may be flattered to be an object of an author's/fandom's affection.

Compare Fan Service, Author Tract, Writer on Board, Filibuster Freefall, and Mary Suetopia. Contrast Playing to The Fetishes when it seems like the author is acting out a personal fetish but is in fact just playing to a niche demographic. Very common in Fan Fiction.

If a writer's early work contains obvious Author Appeal, and their later work doesn't, this may overlap with Old Shame.

Creator Thumbprints are often this.

Examples of Author Appeal include:

Retrieved from "https://allthetropes.org/w/index.php?title=Author_Appeal&oldid=1927299"
Categories:
Cookies help us deliver our services. By using our services, you agree to our use of cookies.