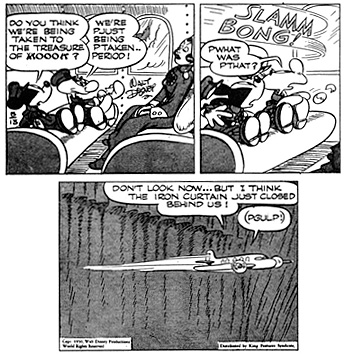 Not to mention the maintenance costs.

The Iron Curtain was the physical dividing line between Western Europe and the Warsaw Pact section of Commie Land during the Cold War, designed to stop people from the East going to the West, and (to a lesser extent) people from the West going to the East without authorization. It was justified with the argument that a barrier was needed to stop the infiltration of spies from the other side. History has shown us, from the collapse of the Berlin Wall, what we expected all along: it was to keep the serfs from escaping, as the area was more like a gulag than what its rulers claimed it to be: a "worker's paradise."

Like the Warsaw Pact itself, it was not a monolithic entity. The level of defences varied between countries, being thickest between the two Germanies and on the border of Czechoslovakia and thinner elsewhere. Between Austria and Hungary, it was just a fence and was easily dismantled. Or, to reuse a metaphor, the Iron Curtain turned out to be Rusted Drapes!

When Churchill spoke, Austria (and its capital Vienna) was similarly divided, though unlike Berlin, the centre of Vienna was an international zone, patrolled by "four in a jeep" - one British, one American, one Soviet and one French soldier. However, in 1955 the four powers agreed to withdraw from Austria and reunify the country. In exchange, Austria promised to remain neutral, which it did. Vienna became likewise a popular setting for spy dramas thanks to its "no man's land" status.

Yugoslavia, while socialist, left the Soviet bloc fairly soon after Churchill's speech and the Iron Curtain never went between Italy and what is now Slovenia. Albania was far more closed off though - in fact Albania also left the Soviet bloc, thinking the USSR too soft and following Mao's China, and later isolated themself even further.

Examples of Iron Curtain include:
Retrieved from "https://allthetropes.org/w/index.php?title=Iron_Curtain&oldid=1589037"
Categories:
Cookies help us deliver our services. By using our services, you agree to our use of cookies.