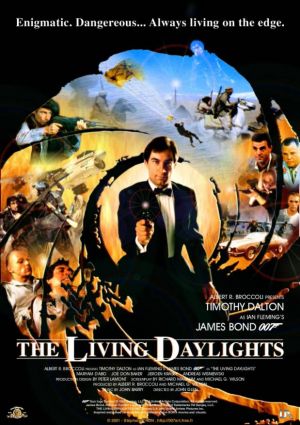 The 15th James Bond film and the first of the two starring Timothy Dalton as the suave British agent. 007 goes to Bratislava, Czechoslovakia to help a defector get to the West. The mission is successful. Then the defector is kidnapped...

This is one of the most complex of the Bond films with a few good twists along the way, and a lot of great action scenes, as well as being one of the ones that feels somewhat like an actual spy movie, if still clearly a Bond film. It's also the last for the time being to have featured a (lead) blonde Bond Girl (or if you're feeling punny, a Blonde Girl).

Tropes used in The Living Daylights include:
Retrieved from "https://allthetropes.org/w/index.php?title=The_Living_Daylights&oldid=1591607"
Categories:
Cookies help us deliver our services. By using our services, you agree to our use of cookies.