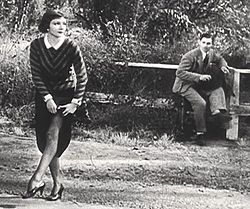 The calf is mightier than the thumb.

Female character provides a distraction by flirting with and/or showing some skin to an opposing guard, Spear Carrier and/or Red Shirt characters. Of course if you have large breasts it's a lot easier. And some characters are distractions all by themselves.

This trope does not mean characters whose outfit only covers their top half; that's Stripperiffic, She's Got Legs or possibly Who Wears Short Shorts? This trope is probably the only reason a female warrior would even consider a Chainmail Bikini. Might be more directly applied via a Kiss of Distraction.

Examples of Show Some Leg include:

Retrieved from "https://allthetropes.org/w/index.php?title=Show_Some_Leg&oldid=1770693"
Categories:
Cookies help us deliver our services. By using our services, you agree to our use of cookies.