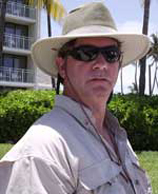 Writer of Military Science Fiction, Fantasy (both urban and traditional), and other novels.

Works written by John Ringo include:

Mr. Ringo's website can be found here, for more details than in this (currently sketchy) article. It's mostly empty, being a work-in-progress replacing a defunct site.

Retrieved from "https://allthetropes.org/w/index.php?title=John_Ringo&oldid=1930241"
Categories:
Cookies help us deliver our services. By using our services, you agree to our use of cookies.