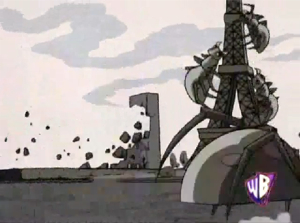 When Chewing the Scenery goes too far.

The alien horde approaches. They don't necessarily want to give us a Face Full of Alien Wingwong, or be The Virus and transform us, or what all... they're just into adding biomass by whatever means necessary and as fast as possible.

Because the only purpose they have in life, the be-all and end-all of their existence, is the conversion of all organic matter in the universe into more of them. They don't do diplomacy, because you don't bargain with lunch. This is, of course, always cause for a Bug War.

Most Locust Hordes use, or are, Organic Technology. However, Nanomachines can also become a Horde—the (in)famous "Grey Goo" scenario.

Compare To Serve Man and the slightly less extreme (as in, they are intelligent and only want inorganic resources) Planet Looters, and do not confuse them with Insectoid Aliens, who may or may not be this trope. Horde of Alien Locusts is a common way to set up a Guilt-Free Extermination War, since it's a fight between a group that wants to eat everything and the groups that don't want to be eaten. Not necessarily related to Giant Space Flea From Nowhere. Related to The Swarm

Examples of Horde of Alien Locusts include:

Retrieved from "https://allthetropes.org/w/index.php?title=Horde_of_Alien_Locusts&oldid=1940666"
Categories:
Cookies help us deliver our services. By using our services, you agree to our use of cookies.