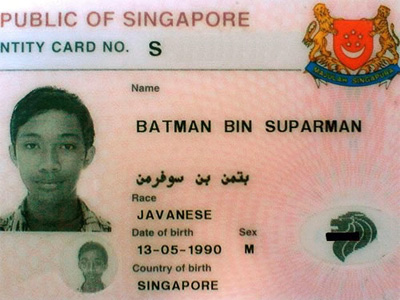 Get lost, John Smith, here comes Johnathan Q. Public. Sometimes, people grow up with boring names, and they imagine more exciting and exotic names for themselves. If you let this person write a piece of fiction, expect this flair for the exotic to show up in a lot of their characters. Try to imagine this person as a baby or as a toddler and everyone calling them this. Try to imagine the parents who would name them this.

The story is set in a modern-day city, where everyone inexplicably has "cool" names. There's no one named Bill, Todd, or John. It's all "Anubis", "Scar", "Bullet", "Diamond", etc. Even better if these aren't nicknames, but their actual given names. It can double up as a Meaningful Name.

When a video game lets you do this to the characters you control, it's called Hello, Insert Name Here.

The opposite of Unfortunate Names and Fail O'Suckyname, while Plain Name lies in between these two.

See also Names to Run Away From Really Fast, Xtreme Kool Letterz, Punctuation Shaker, My Nayme Is, Aerith and Bob, Law of Alien Names and Who Names Their Kid "Dude"?.

Examples of Awesome McCoolname include:

Also, the student in Exploits of a Mom and according to Alt Text, his sister (who goes by her middle name, "Elaine").

Examples of groups, places, and things with exceptionally cool names

Retrieved from "https://allthetropes.org/w/index.php?title=Awesome_McCoolname&oldid=1966103"
Categories:
Cookies help us deliver our services. By using our services, you agree to our use of cookies.