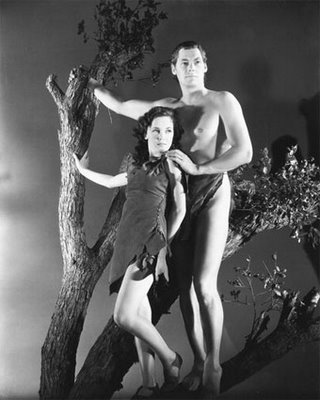 First created by Edgar Rice Burroughs in 1912, Tarzan has since swung through dozens of books, films and TV series, both straight and parodied. Tarzan is the quintessential jungle hero; white but at home in Darkest Africa. Often seen in a leopard Loin Cloth.

In the original books, Tarzan was the son of Lord Greystoke, raised by apes after being orphaned in Africa as a baby. After meeting Jane and learning the basics of human interaction, he left the jungle in search of his true love. They married and settled in England, where they had a son, but eventually grew tired of civilization and returned to the jungle. These books include:

Most of the films omit Tarzan's English sojourn and his status as Lord Greystoke. Instead, he has often been provided with a pet chimpanzee and an adopted son -- the latter because the film Tarzan never formally married Jane, and thus was not allowed by the Hays office to actually have gotten her pregnant.

Tarzan's further adventures, whether by Burroughs or those who came after him, have one of two plots: either Tarzan discovers a Lost World (even visiting Burroughs' own hollow-earth Pellucidar in one novel), or he defends his African friends against European villains. Along the way, Tarzan and his family became immortal, if only in the literary sense.

The quote at the top of the page is a Beam Me Up, Scotty, as Tarzan did not say it in any of the books, or even, exactly, in any movie - he just slapped his chest and said "Tarzan", then poked Jane and said "Jane". (In the books, Tarzan was very intelligent and well-spoken, and by the end of the series, spoke something like thirty languages fluently.)

The earlier Tarzan novels are out of copyright in the US, but not in Europe, and The Other Wiki suggests he's also trademarked by the author's company. Altogether, that explains why The League of Extraordinary Gentlemen only refers to him as "Lord Greystoke".

The Jungle Princess is his generic Distaff Counterpart.

Tarzan books with their own trope pages include:
Tropes used in Tarzan include:
Adaptations include:
Various adaptations provide examples of:
]
Retrieved from "https://allthetropes.org/w/index.php?title=Tarzan&oldid=1846526"
Categories:
Cookies help us deliver our services. By using our services, you agree to our use of cookies.