Kindred Spirits on the Roof 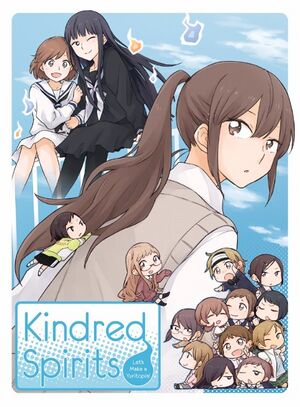 Kindred Spirits on the Roof (屋上の百合霊さん Okujou no Yurirei-san) is a Japanese Eroge Yuri Visual Novel developed by Liar Soft. It was released in Japan on 30 March 2012. The game was licensed by MangaGamer, who released it in English on 12 February 2016.

The visual novel involves schoolgirl Toomi Yuna encountering two ghost girls on the roof of her school, who are bound to the building site, and unable to leave. Enoki Sachi and Nagatani Megumi, the ghosts of girls who died in the school 80 and 30 years earlier respectively, are in love with each other, and want to experience their first time together so that their spirits can be at peace, and pass on. The problem is, neither one of them knows how to do it. The two ghosts persuade Yuna to help them create other yuri couples at school, so that they may observe them, and gain the necessary knowledge to consummate their relationship. The story takes place over eight months of a school year, following sixteen different characters, and their relationships.

In addition to its premise, Kindred Spirits on the Roof is notable for being the first visual novel on Steam to be released completely uncensored. A four-part Drama CD, set after the events of the visual novel, has been produced, with MangaGamer expected to release the English-subtitled version later in 2016.

The game's site can be found here.

Tropes used in Kindred Spirits on the Roof include:
Retrieved from "https://allthetropes.org/w/index.php?title=Kindred_Spirits_on_the_Roof&oldid=1547611"
Categories: