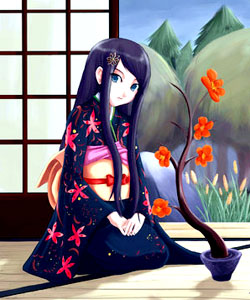 A complicated Japanese aesthetic and cultural concept. Breaking the expression down: "Yamato" is one of the older (and thus fancier) names for Japan and the Japanese culture; "Nadeshiko" is Japanese for Dianthus superbus, otherwise known as the carnation, a wildflower native to the Japanese highlands.

Broadly speaking, a Yamato Nadeshiko is the "flower of Japanese womanhood", a woman with attributes that were traditionally desirable in Japan from the perspective of male-dominated society; generally ascribed to people with traditional upbringings. Basically it revolves around acting for the benefit of the family and obeying and assisting authority figures (father, husband, sometimes father-in-law or older brothers, as well as older females of similar personality traits). Virtues include loyalty, domestic ability, wisdom, maturity, and humility.

This sounds like an Extreme Doormat, especially to modern Westerners, but don't be fooled; the nadeshiko is a wildflower, after all. A properly done yamato nadeshiko will show a subtle, but definitely present, touch of iron, in that she is unwilling to let circumstances hurt the ones she cares about or distract her from her goals or missions. (Conversely, in poorly done cases this can come across as a forced attempt at trying to convince the audience that the nadeshiko in question isn't just a doormat with no personality.) This is often accomplished so subtly that the target isn't quite certain how things got redirected—a kind of influence judo, if you will. Older yamato nadeshiko are better at this, while a younger one will make up for it in determination—especially when it comes to the man she loves, because that trumps everything else. Remember: this is just a trope, and all Tropes Are Tools.

A poorly done Yamato Nadeshiko will turn out like an Extreme Doormat. They are silent and submissive without the inner strength of a true Yamato Nadeshiko. This is a common stereotype of East Asian women in Western fiction and is often referred to derisively as the China Doll stereotype.

With some notable exceptions, physically yamato nadeshiko will be of medium height, willowy, modestly endowed, and good-looking without being too beautiful or too cute; they will have pale skin and long, dark hair with full, straight bangs and side-bangs. They'll dress in feminine fashions: skirts, blouses, low-heeled shoes, lace, ribbons and simple hair ornaments. The other option is impeccable lady-like style for adults. A Kimono Is Traditional is never a bad choice and is likely to be worn by nadeshiko brought up in the good old Kyoto style. Some may use jewelry and make-up, but not to the extreme. Their voices will often be gentle, calm, and warm as melted butter. Large rounded eyes are always a good bet. It is not unusual for geishas to be Yamato Nadeshiko.

Sometimes, these seemingly ultra peaceful ladies will also handle at least the basics of self-defense, even if they would rather not fight unless it can't be helped. This makes sense, since many nadeshiko came from samurai clans and thus were trained in fighting so they could defend their homes whenever the males were absent. If that's the case, they'll be very graceful and effective in the battlefield, and they're likely to be White Magician Girls or Barrier Warriors. If they're neither, they'll likely use polearms, lances (specifically naginata which daughters of samurai families were traditionally trained in and were more than once included in a yamato nadeshiko's dowry) or bow/arrows, and maybe even small tantou daggers that may be hidden in their clothes.

Yamato nadeshiko characters pop up a lot in Magical Girlfriend series (usually as the one who will win the male lead's heart) and as the "Betty" in Betty and Veronica Love Triangles. They tend to be very sympathetic, but their passive, reactionary nature puts them in danger of becoming Satellite Characters for more "interesting" people, as well as target of bashing from fans who prefer either Action Girl or Tsundere types (and not all of them being "so-called feminists"). The yamato nadeshiko is much more popular in Japan for obvious reasons.

You will sometimes find males who fit in the yamato nadeshiko role pretty well, personality and/or looks-wise (like Japan in Axis Powers Hetalia, obviously), but this is still rare.

More information on this concept can be found in the sci.lang.japan FAQ. Compare Stepford Smiler for a critical take, and Yandere for a girl who seems to be a yamato nadeshiko but hides a far more unstable psyche, as a Deconstruction of this Trope. Her sort-of early Western equivalent is the Determined Widow. A more passive Victorian era Western equivalent is the "angel in the house." Or as we call it, Proper Lady. An attempt to take this trope's appealing traits Up to Eleven while still playing it straight runs the risk of producing a Purity Sue.

This trope is commonly used in the portrayal of a Patient Childhood Love Interest character's personality.

Unusually, our page goes into far more detail than The Other Wiki's page does. Note: This trope is for the Japanese Ideal in particular, or Eastern Asian Ideal in general. For the western/European ideal see Proper Lady. For a general 'proper on the outside, powerful on the inside' woman use Silk Hiding Steel. For tropes describing homemakers and housewives in general, use Housewife. To describe 'innocence' or 'gentleness' use The Ingenue. Polite or friendliness can be covered by Nice Girl.

Examples of Yamato Nadeshiko include:

Retrieved from "https://allthetropes.org/w/index.php?title=Yamato_Nadeshiko&oldid=1943245"
Categories:
Cookies help us deliver our services. By using our services, you agree to our use of cookies.