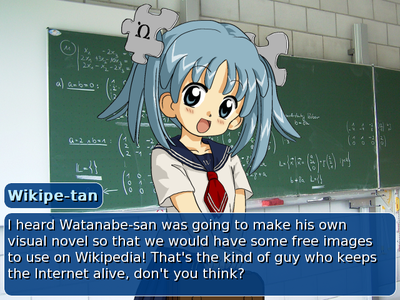 Visual novels are a medium using the narrative style of Literature, but in a digital format that could technically be considered a Video Game. Visual novels put emphasis on the plot and on characterization, rather than on action scenes. They are effectively a digital version of the Choose Your Own Adventure books, with music, pictures, and occasionally even voice acting or movies. However, unlike most Choose Your Own Adventure books, they usually branch off into distinct storylines early on, and have a lot less choice points.

The level of gameplay can vary, leading to difficulty in defining the boundaries of the medium. On the far video game end exist games such as the Ace Attorney series, with Kinetic Novels (visual novels completely devoid of interaction) and Linear Visual Novels on the far literary end such as When They Cry. Because they are treated as games, the fact that many of them tell well-written, compelling stories can be easily overlooked. Games like Hotel Dusk: Room 215, Jake Hunter, and the Ace Attorney series are bringing this style of gameplay into markets outside of Japan, where they are much more recognized.

Visual novels that are also eroge tend to tie every storyline to a specific romanceable character, a habit which has carried over to most of the rest of the medium.

Because the market for Dating Sims is virtually non-existent outside of Japan, people tend to assume that any Visual Novel that is a Romance Game should be called a Dating Sim, when they are actually quite different. (It doesn't help that most Visual Novel-style Eroge are marketed as "Dating Sims" when they are translated for the US market.) Using well-known examples, the Ace Attorney series has very much a Visual Novel style of gameplay, while the DOA Xtreme series is probably the game closest to a true Dating Sim with mass-market appeal in the US.

Most Japanese visual novels never get an official release outside of Japan, though this is beginning to change with companies such as MangaGamer and JAST licensing more and more visual novels. Still, the bulk of visual novels are translated by dedicated fans if they are translated at all. Many of the novels on this list have an existing Fan Translation, partial or full.

There are also a small but growing number of English-developed visual novels, generally created by indies and not sold through mainstream channels.

VNDB is a database dedicated to visual novels, in the vein of IMDB. It also lists any existing fan translation a novel may have.

Retrieved from "https://allthetropes.org/w/index.php?title=Category:Visual_Novel&oldid=1957040"
Categories:
Cookies help us deliver our services. By using our services, you agree to our use of cookies.