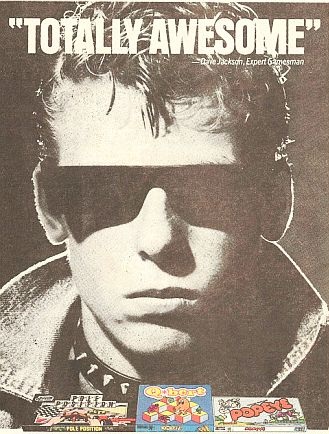 Make a tubular description of Totally Radical on this gnarly page, dude.

Most television shows for audiences younger than 25 are written by people significantly older than the target demographic. On its own, this is all right. It is when these writers attempt to co-opt the culture of the younger generation that the trouble starts.

The biggest problem is slang. Either it's out of date (usually from the writers' own childhood), or it's awkwardly misused. Either way, there will be gnarly, bitchin' amounts of it, slathered over the dialogue like sauce over a particularly inept casserole.

Also problematic is what kids do in their leisure time. This can be particularly painful if they're attempting An Aesop about something that's recently become popular. Usually, that involves many stereotypical "bad boy" or "cool" activities, such as videogames, surfing, motorcycling, or fixing cars; a recent example would be grossly stereotypical "Sk8r Boiz". However, even your standard episode won't probably show video games (for instance) as anything but the back of a TV with some Pac-Man-esque beeps and boops played over the soundtrack.

This also applies to commercials focused on kids, although they'll at least be knowledgeable about the product they're selling.

Of course, this can be done well. Most producers figure, though, that kids can't tell good writing from bad (Viewers are Morons, after all), and throw whatever out there. Most of the time, these producers are simply playing into loose cultural stereotypes, probably not realizing that many real life teens have no involvement or interest in what's perceived as "hip" anyway, so such imagery (even if it's perfectly up-to-date) is of little value to them. Because TV Never Lies, some impressionable viewers even believe it, resulting in Pretty Fly for a White Guy. Buffy-Speak is a common way of avoiding this for those who do care. Another way to avoid the problem is to do it intentionally badly.

Don't forget, you copacetic hepcats, that if a show is trying to be set in a period older than the 80s, the same rules apply.

Shows on the Disney Channel, Nickelodeon (especially the "New" Nick), and Cartoon Network are known for doing this, despite most of them centering around tweens and teenagers. This is usually entwined with the overuse of far-past-neutered euphemisms, like "crud". Badbutt characters often speak this way.

A rich, deep well of Narm, especially when it's a Long Runner's obvious ploy to stay Relevant, Dammit. See also Younger and Hipper, Jive Turkey, Buffy-Speak, Surfer Dude, Valley Girl, Leet Lingo, Xtreme Kool Letterz; this is also a common trait of the Mascot with Attitude and the Hippie Teacher. Get a Load of That Square is a common mockery of this. Contrast with Spock Speak; Little Professor Dialog and Neologism. A character like this may also be The Nicknamer.

Examples of Totally Radical include:

Retrieved from "https://allthetropes.org/w/index.php?title=Totally_Radical&oldid=1958470"
Categories:
Cookies help us deliver our services. By using our services, you agree to our use of cookies.