Everything About Fiction You Never Wanted to Know.
Jump to navigation Jump to search
/wiki/Kraftwerkcreator 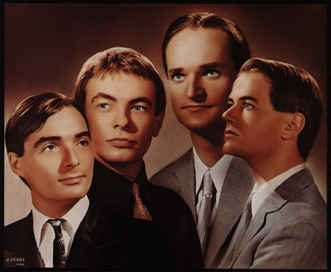 Kraftwerk is a German electronic group based in Düsseldorf, Germany, noted for such songs as "Autobahn", "The Robots", and "Trans-Europe Express". Originating in the highly experimental rock scene of 1970s West Germany, they're practically the Trope Maker of Electronic Music in general, being among the very first groups to begin experimenting making music electronically, starting in the early 1970's. They are directly responsible for for the existence of dance, techno, Industrial, EBM, Synth Pop, and even early Hip-Hop.

Their songs mainly have to do with technology ("Kraftwerk" is German for "Power Plant"). Their gimmick basically was that they were robots; Kraftwerk will often put on concerts and give interviews through robotic replicas of themselves. The robots became less and less human-like over the years.

Kraftwerk provides examples of the following tropes:
Retrieved from "https://allthetropes.org/w/index.php?title=Kraftwerk&oldid=1849465"
Categories:
Cookies help us deliver our services. By using our services, you agree to our use of cookies.