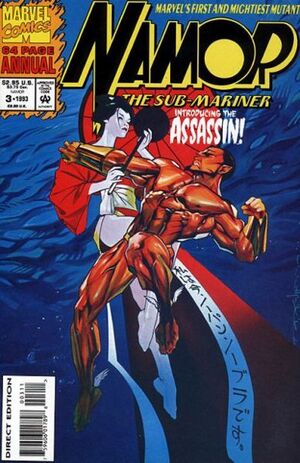 The text on her kimono says: "I’m not wearing any underwear."[1]

Sometimes one will find that in a work where the Translation Convention is otherwise in effect or which offers translations of the important information will either suspend the convention or omit translation for the sake of including messages "hidden in plain view" by being expressed or written in another language. This ostensibly makes said messages available only to those viewers, players or readers that have sufficient knowledge of the language in question. This often coincides with Ominous Latin Chanting (which, if translated, might sound about as ominous as reading street addresses from a telephone book); in Video Games specifically, this is often concurrent with Enemy Chatter.

As you may have guessed, this can be a very clever way of Getting Crap Past the Radar. In fact, Hollywood censors once demanded English translations of any part of a screenplay written in a foreign language (whether that language was real or made-up) precisely to thwart this, since subtitles traditionally weren't used in American films even when a character was speaking a language other than English.

If the word still makes sense in another way then it's also a Multiple Reference Pun.

This, of course, not only applies to actual languages, but also the various fictional languages that have full-blown lexicons and can technically be translated — Quenya and Sindarin, Klingon, D'ni from the Myst verse, et cetera.

Compare Genius Bonus, where the non-plot-related bonus is not language-related.

Examples of Bilingual Bonus include:

Retrieved from "https://allthetropes.org/w/index.php?title=Bilingual_Bonus&oldid=1967356"
Categories:
Cookies help us deliver our services. By using our services, you agree to our use of cookies.