Everything About Fiction You Never Wanted to Know.
Jump to navigation Jump to search
/wiki/Daft Punkcreator 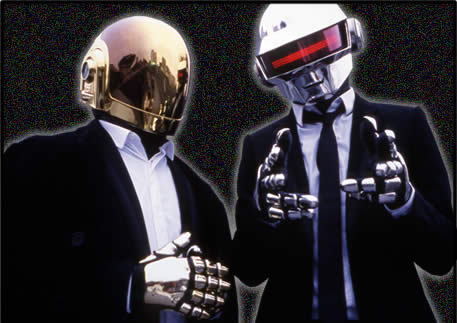 One of the most popular electronic bands ever (along with Kraftwerk and a few others). Formed in 1993 by Frenchmen Thomas Bangalter and Guy-Manuel de Homem-Christo, they basically invented French House music and have done much to make electronic music mainstream.

They have released three albums so far (as well as a number of remixes, a film score or two, two different movies, and a bunch of other side projects). The first two, Homework and Discovery, are pretty much universally loved, while Human After All is not. There's also two live albums full of mashing and mixing of their songs too, entitled Alive 1997 and Alive 2007.

The duo are also the embodiment of The Faceless, having spent the bulk of their careers shrouded in secrecy and, save for several publicity photos taken early on in their careers before signing to a major label, never being photographed without some form of mask over their faces. Their most famous mask of course, being their robot masks which have come to be known as their de facto "faces" to the general public.

They also pull off one of the best live shows in existence by mashing and mixing together their songs... while playing in an LCD screen pyramid in front of a glowing honeycomb. And dressed as robots. (No, really, see for yourself.)

They collaborated with the legendary Leiji Matsumoto to create an animated film out of their album Discovery called Interstella 5555: The 5tory of the 5ecret 5tar 5ystem. They also created a surealistic art-house film called Electroma, which basically tells the origin of their robotic alter egos.

Their last project was the score for Tron: Legacy. They do appear in the movie as the personified versions of media player programs.

They also contributed eleven mixes for the Guitar Hero Spin-Off, DJ Hero, as well as being playable characters in the game. Two of these mixes are "Another One Bites Da Funk" and "We Will Robot Rock You".

After a few years, the band returned in 2013 with their fourth studio album, Random Access Memories. The album takes cues from 70's funk and disco, and was released with the lead single 'Get Lucky', reaching #1 in many countries.

In February 2021, they announced that they had broken up the band after 28 years.

Discography:
Daft Punk provides examples of the following tropes:
Retrieved from "https://allthetropes.org/w/index.php?title=Daft_Punk&oldid=1877508"
Categories:
Cookies help us deliver our services. By using our services, you agree to our use of cookies.