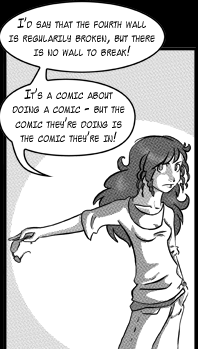 ...oh, you wanted more? But that was metafiction right there! Oh, but you want these tropers to explain it to you? Fine. Alright, pull up your chairs close to your computers and settle down. I'll tell you the tale of Meta Fiction.

Once upon a time, a man named Report Siht wrote a story. Except he didn't want it to be like other stories. He wanted to comment on other stories with his story. His story included stuff about stories. Thus it was Meta Fiction. He published it and everyone was happy. Except for the people who wrote the stories he was commenting about, of course, but don't worry, rocks fell and killed them. The End.

Meta Fiction ("meta" meaning "referring to itself") is when a story (or movie or television show) comments upon another piece of fiction or upon its own fictionalism. Yes, that's a word. For example, in Hamlet, the titular prince has the play The Murder of Gonzago or The Moustrap put on to Catch the Conscience of Claudius. Of course, at the time Hamlet was written, The Mousetrap was fictional and later on, Agatha Christie actually wrote a play called The Mousetrap, defictionalizing it. Yes, that's a word, too.

For a more recent example, there's the 2002 film Adaptation. Directed by Spike Jonze and written by Charlie Kaufman, it stars Nicolas Cage as... Charlie Kaufman and his (fictional) twin brother Donald Kaufman. Charlie tries to adapt the real book The Orchid Thief by real author Susan Orlean (played by Meryl Streep), which Charlie Kaufman actually tried to do before getting writer's block and writing Adaptation. Interestingly enough, within the movie Adaptation, the fictional Charlie Kaufman writes Adaptation and gets Gerard Depardieu to play him, making this an example of metametafiction.

There are various forms of metafiction, all of which can be found here and here.

By the way, we're not actually having a conversation. You're actually reading this on a computer screen. Metafictioned!