Show Within a Show 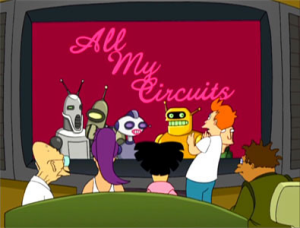 Shows-within-a-show are usually of low quality. This is intentional: the low quality of the show is part of the joke or the misery of the characters involved. As a general rule, the more central the Show Within A Show is to the actual show, the better—or at least higher-gloss—it will be.

Many comedies have short one-off gags where they parody existing shows. Most of the following examples are recurring and they come in up to four varieties (which can be overlapping):

Sometimes these shows can be shown as Separate Scene Storytelling.

For the pre-television history of this trope, once again we must go back to Shakespeare, who featured plays within plays both in comedy; The Most Lamentable Comedy, and Most Cruel Death of Pyramus and Thisbe within A Midsummer Night's Dream, and The Taming of the Shrew actually is one by means of a Framing Device, and in tragedy (The Murder of Gonzago within Hamlet).

Compare with School Play, Soap Within a Show, Who Would Want to Watch Us?, Fictional Document, Framing Device, Recursive Fiction, Recursive Reality (of the "nested stories" variety), Mutually Fictional, Pushed in Front of the Audience, Post Modernism, Plot Parallel. Having one is a requirement for a Movie Match Up and Her Codename Was Mary Sue.

Examples of Show Within a Show include:

Something of a A Running Gag in the franchise, the show had a nutty host with glasses and a mustache, several well-endowed female models, and slapstick comedy.

Examples of type 2 (characters are fans)

Retrieved from "https://allthetropes.org/w/index.php?title=Show_Within_a_Show&oldid=1887555"
Categories:
Cookies help us deliver our services. By using our services, you agree to our use of cookies.