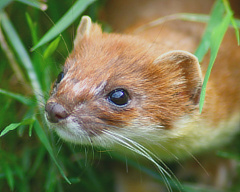 This is not a Necessary Weasel. It's a Gratuitous Weasel Mascot, courtesy of the Rule of Cute.

"Be happy that weasels infest the world. Weasels are like motor oil for society. It wouldn't be fair to judge motor oil outside the context of an engine. If you put motor oil in your mouth, it would be filthy and slimy and leave a bad taste. But when that oil is inside an engine, it does an important job and you're glad it's there. Weasels are the same way. Slimy and disgusting, but essential."
—Scott Adams, The Way of the Weasel

As a logical extension of Tropes Are Not Bad, many tropes that might otherwise come across as gratuitous, offensive or just plain wrong in most genres are considered not just accepted in certain genres, but is practically a part of the genre. Complaining about the simple use of the tropes (as opposed to particularly offensive variations) in said genres is rather short-sighted and pointless, since, well, it's in almost every other work in the genre.

Can often be the cause of an Enforced Trope. Some Acceptable Breaks From Reality are Necessary Weasels to particular genres as well. Contrast with Bad Writing Index, an article listing some real (versus merely perceived) flaws.