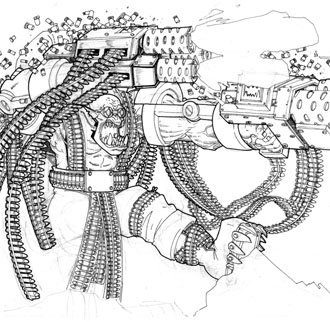 "Dakka": Ork slang for rapid fire capability, based on the onomatopoeia for automatic guns shooting. You need moar of it. No exceptions.
—1d4chan on dakka

More Dakka is a form of Spam Attack with bullets—the art of solving problems by firing as many rounds at them as possible. Improbable Aiming Skills are all very well and good, but sometimes you just need to throw a wall of bullets at the target—perhaps your foe can Dodge the Bullet, or you're up against a whole army of Mooks at once. Modern automatic weapons can achieve the rates of fire required for more dakka all by themselves, but using a whole bunch of slower-firing guns works too. More dakka can even work against targets where conventional attacks are normally ineffective—even if each shot only does Scratch Damage, it will succumb to a Death of a Thousand Cuts eventually.

Gatling Good and Guns Akimbo are common ways of achieving more dakka, and you can expect to see gratuitous camera shots devoted to torrents of shell casings produced by the volume of fire. Unfortunately, more dakka has a good chance of accomplishing little or nothing, in the case of A-Team Firing or if the shooters are graduates of the Imperial Stormtrooper Marksmanship Academy. The Gunslinger may specialize in more dakka.

A Sub-Trope of Spam Attack. Contrast Improbable Aiming Skills, when a character uses amazing accuracy instead of volume of fire.

AN' DERE AIN'T NO SUCH FING AS ENUFF DAKKA, YA GROT! Enuff'z more than ya got an' less than too much an' there ain't no such fing as too much dakka. Say dere is, and me Squiggoff'z eatin' tonight!

Not to be confused with Baka, as there is very definitely such a thing as "Enuff Baka".

No real life examples, please; we don't care how big your horde of weapons is.

Examples of More Dakka include:

"Mocking Statement: Fully armed? One can never be armed enough".

Note: The rotating barrel assembly on the Strohl Munitions Short-barrel handcannon may give the user a wicked pinch if the weapon is held incorrectly. This makes it an unpopular selection for many military forces. Also, it can be configured to send anywhere between five hundred and five thousand projectiles per minute downrange with great accuracy, making it an exceedingly unpopular selection for the enemies of many military forces.

Raven: Subtlety is a thing for philosophy, not combat. If you're going to kill somebody, you might as well kill them a whole lot.

Michael-Lan almost snorted with laughter. "If this was human work, you'd be dead. The favorite expressions of humans where killing is concerned are 'if some is good, more is better', 'nothing succeeds like excess' and 'more dakka'. If humans wanted to kill you, you wouldn't just be dead, your body parts would be strewn over half the Eternal City. This wasn't human work, this was somebody else."

58: Expended ammunition is not a business expense.

And that's still not enuff dakka.