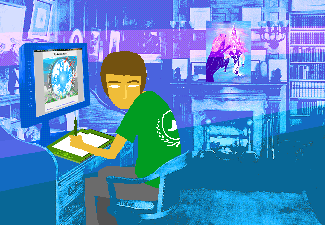 A fictionalized version of an author who appears as a character in the events of the story and is often called upon to comment upon the situation, deliver the author's verdict, and possibly break the Fourth Wall in a self-deprecating fashion. The author character will usually not influence the plot and may be only loosely tied to the goings-on, their appearances being quite random. The high-falutin' literary term for a character designed to express the author's preferred opinions is the raisonneur — here at All The Tropes, the preferred term is Author Avatar.

How this "random" character knows the characters and their minor issues is rarely explained within the context of the series. Very often it is stated or implied that the avatar is the narrator.

This is typically a holdover from comedic comics, in which the author of a series appears in the show in a self-mocking way. The Author Avatar sometimes appears as the Only Sane Man, though rarely as the Straight Man. Sometime names will be changed to protect the guilty.

If the Author Avatar is idealized to a fault, always gets the last word, is always shown to be right and starts correcting the world around them, then reader beware: the author has just created a Canon Sue. Given the nature of the character, the Author Avatar is often called to deliver an Author Filibuster from time to time.

The other way to go is with Self-Deprecation; the characters will use the meeting to Rage Against the Author or ask Who Writes This Crap?, or threaten him with violence, if they don't actually commit it. After all, the author put their characters though a lot in the name of drama - just imagine what Buffy the Vampire Slayer would say (or do) to Joss Whedon if she had the chance[1]

Often, the avatar will show up on product logos and random artwork within the show.

If the character has a role in the plot, see Write Who You Know and Life Embellished. When done in works, most often Fanfic, and the avatar becomes a central figure in the story, it becomes a Self-Insert Fic. It has also been done for decades in Western Comic Books since The Silver Age of Comic Books, possibly predating its Manga usage. It should not be confused with Creator Cameo since a cameo may include the creator just being in the background doing nothing or actually playing a character not meant to be them.

An old Trope of The Forties and Fifties is the "personal fallacy", the idea that everything in fiction is derived directly from Real Life. Some went as far as to state that any character that even faintly resembled the author had to be an Author Avatar or even a Mary Sue. Needless to say, this was often taken too far: see the article on Dorothy L. Sayers for a particularly Anvilicious example.

Such characters will often have Author Powers. Compare Muse Abuse, to which the Author Avatar is often both victim and perpetrator.

Examples of Author Avatar include: 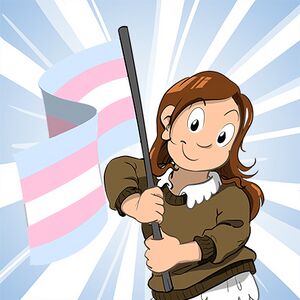