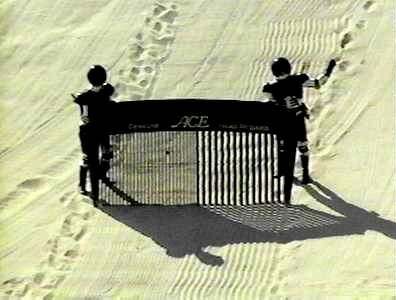 "We were told to comb the desert, so we're combing it!"

When a phrase which is usually used as a metaphor is instead done, and shown as being performed literally. This can be because The Ditz didn't understand the statement, or can just be a simple gag. Often considered one of those "old-fashioned" forms of comedy, so its use nowadays rarely does little more than "produce some smiles." Occasionally this action can be performed literally but without much fanfare, implying what's going on. Can often be combined with a Literal Genie.

Common versions include requests to "give me a hand" being met with disembodied hands and quotes of Marc Antony "lend me your ears"... well, use your imagination.

B-Roll Rebus is when news and documentaries do this with Stock Footage. Compare Stealth Pun, which is sort of like a Visual Pun without the visuals. Supertrope to Rules of the Road in cases where road signs are literal, not figurative, depictions of what's up ahead.

Examples of Visual Pun include:

As noted above, Aardman (or at least Nick Park) use a lot of visual puns.

All The Tropes Wiki

Retrieved from "https://allthetropes.org/w/index.php?title=Visual_Pun&oldid=1769388"
Categories:
Cookies help us deliver our services. By using our services, you agree to our use of cookies.