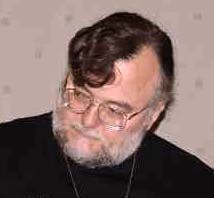 Themes in his work include the effect of culture on individual morality, the effect of technology on culture, and ... well, let's just say there's a reason one of his Fan Nicknames is "S&M Stirling".

Was once a member of the AlternateHistory.com forum.

Works written by S.M. Stirling include:
Retrieved from "https://allthetropes.org/w/index.php?title=S.M._Stirling&oldid=1930239"
Categories:
Cookies help us deliver our services. By using our services, you agree to our use of cookies.