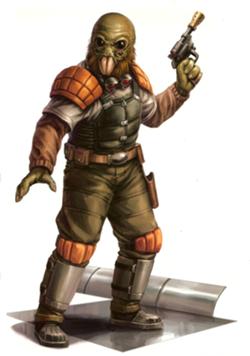 There are Human Aliens which are indistinguishable from humans (at least on the outside appearance). Then there are Rubber Forehead Aliens, which look like humans but with some minor differences.

Then there are Humanoid Aliens that have the general shape of a human, but definitely look nothing like us. Be it a different number of fingers, different skin, feathers, whatever. Only similarity they need is one head, two arms, two legs, and a generally upright stance, tail and/or wings optional. Any further deviation from the humanoid form is likely to result in Starfish Aliens.

Like Human Aliens and Rubber Forehead Aliens, the prevalence of this trope—in live-action TV in particular, though also in movies and comics and other primarily visual media—tends to have a lot to do with the need to create something that human actors can comfortably portray, that human artists can conveniently and quickly draw, and that human viewers/readers can intuitively empathize with. However, theories of convergent evolution (the idea that similar environments facilitate similar patterns of isomorphic development in different species) may make this more of a Justified Trope, at least so far as creating believable situations of dramatic interaction. Given that we've only seen a grand total of one planet with a biosphere and intelligent life, we have no way of knowing how realistic or unrealistic this trope is.

May overlap with Petting Zoo People or Intelligent Gerbils.

Examples of Humanoid Aliens include:

Retrieved from "https://allthetropes.org/w/index.php?title=Humanoid_Aliens&oldid=1522830"
Categories:
Cookies help us deliver our services. By using our services, you agree to our use of cookies.