Everything About Fiction You Never Wanted to Know.
(Redirected from Useful Notes/South Africa)
Jump to navigation Jump to search

The Republic of South Africa is situated at the southern tip of Africa and comprises nine provinces. Bordering on Mozambique, Zimbabwe, Botswana, Namibia and Swaziland, and completely surrounding Lesotho, it formed part of the British Commonwealth until its independence in 1961, but continued to implement the segregationist laws collectively known as the Apartheid system until 1994, when Nelson Mandela was elected president in the country's first democratic elections. Its capital cities are Pretoria, Bloemfontein and Cape Town, which are recognised respectively as the executive, judicial and legislative capitals (i.e., a separate city for each branch of government).[1]

South Africa has a somewhat... complex history, due largely to its diverse ethnic make-up and its extremely unfortunate colonial legacy of segregation. Even though a good deal of progress has been made over the past two decades, a good half of the population still lives below the poverty line, and housing shortages, not to mention a severely sub-standard education system, a very high crime rate (18,148 murders from April 2008 to March 2009[2]), a reputation as the "Rape Capital of the World," and a one-in-ten HIV infection rate, all pose serious problems.

South Africa's earliest inhabitants were most likely the ancestors of the Khoesan, while Nguni settlers moved down from sub-Saharan Africa around 300 AD, the most populous of these eventually forming the Xhosa and Zulu tribes. The first instance of European contact occurred in 1487, when Bartolomeu Dias, en route to India, rounded the Cape of Storms (later dubbed the Cape of Good Hope, which name is still in use today - the University of Cape Town's motto is spes bona). However, South Africa was not colonised until 1652, when Jan van Riebeeck established a rest colony at the behest of the Dutch East India Company, mainly to supply passing vessels with fresh fruit in order to avoid scurvy. These Dutch settlers would later come to blows with British settlers who arrived during the early nineteenth century, when the British Empire annexed the territory; it is worth noting that for some centuries, the most prominent (or at least best-publicised) cultural divide in South Africa was between Dutch-speaking (later Afrikaans-speaking) whites and English-speaking whites. The Dutch eventually seceded from the coastal areas, then known as the Cape Colony, and migrated north in an exodus called the Great Trek in order to found the Orange Free State. (Trek is an old Dutch-Afrikaans term that can refer to a journey, hence Star Trek.)

During this time, a series of Frontier Wars were being waged by the white settlers, chiefly against the Xhosa, who were migrating south-west, and the Zulu, who had long held the northern areas. The Zulu in particular expanded greatly during the early nineteenth century under the leadership of Shaka Zulu, whose military conquests over the various smaller tribes and factions in that area led to what was retrospectively termed the Mfecane (or Difaqane in Sotho), which can be translated as 'The Hammering' - viewed positively, it can reference the forging of many small tribes into one; negatively, it aptly describes a series of brutal [3] wars. Shaka was renowned during his time for his military genius, which included a series of revolutionary new manoeuvres, the organisation and regimentation of a formal army, and the implementation of new, more efficient weapons; this earned him the nickname of "the African Napoleon". A secession within the Zulu nation spearheaded by Mzilikazi of the Khumalo tribe led to the formation of the Ndebele people in the north; while Moshoeshoe of the Sotho fortified sections of the Drakensberg mountains to found what is today known as Lesotho.

In colonial history, various colonies implemented some forms of institutionalized racism, such as native reservation systems. Whereas some colonies tried to implement parallel systems of national and local native government, others wanted blacks subjugated, and at least one area outright banned blacks from residing there. The discovery in the latter half of the nineteenth century of both gold and diamonds led to significant economic development, several large-scale British invasions of existing nations (both black and white), and the unification of various colonies and republics into the Union of South Africa. This led to the codification of black South Africans as a cheap, exploitable labor force. The African National Congress (ANC) was originally founded in 1910 (the same year as the formation of the Union of South Africa) to ensure than black South Africans would get equal representation in government and the legal system, which at the time was segregated. Unfortunately, the situation worsened in 1948, when Hendrik Verwoerd (a.k.a. 'The Architect of Apartheid') formalized existing local segregation laws into a national framework of segregation. Following this, the entire political mess created by the new legislation became caught up as part of the Cold War, with the West supporting the apartheid government and the USSR supporting the ANC and its allies... and it went downhill from there. See The Apartheid Era for further details. 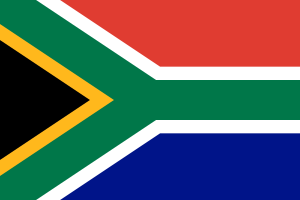 Today, South Africa recognises eleven official languages, namely Afrikaans, English, Ndebele, Northern Sotho, Sotho, Swazi, Tsonga, Tswana, isiXhosa and isiZulu, though certain other widely-spoken languages (such as South African Sign Language, Fanagalo (a Zulu-based pidgin used mostly in the mines, albeit with extremely negative connotations) and various Khoesan languages) are also given unofficial recognition. In addition, its many immigrant communities make use of, among others, Portuguese, Mandarin, German, and Hindi. Various languages are also recognized as being used "for primarily religious reasons", including Hebrew and Arabic. The so-called 'click languages' of South Africa, namely isiXhosa and isiZulu, form part of the Nguni family of languages, and make use of three click consonants, denoted by a 'c' for alveolar clicks, an 'x' for lateral clicks, and a 'q' for clicks that have variously been described as velar, palatal, and velar-palatal; placing an 'h' after a consonant, as in 'Xhosa', aspirates it. (The Khoesan languages may make use of as many as six clicks.) English is still the primary medium of business and instruction. The majority of the population learns it as a second or third language, and it, Afrikaans and sometimes Zulu are used as linguae francae. Very few white South Africans speak a local language besides those two.

The term Khoesan, it should be noted, is best used to describe a specific family of languages, all of which, save Khoekhoegowab, are considered endangered or moribund due to the dwindling numbers of mother tongue speakers. (Korana, for example, has fewer than ten speakers, all over seventy years old.) In a move deliberately designed to parallel the use of Latin in Western countries, the country's official motto as of 2000 is written in !Xam, rendered !ke e: /xarra //ke, and somewhat hesitantly translated as 'unity through diversity', which is intended to convey the importance of tolerance and acceptance. (The Apartheid Era motto was ex unitate vires, or 'strength through unity'. Just think about that for a second.) What to call the people themselves is the subject of much debate, especially as "San" was never used by members of the San tribes, and actually appears to have been a fairly derogatory Khoe word. (Khoe itself is best translated as 'people' or 'men'.)

Over twenty separate political parties ran in the 2009 national election, with alignments ranging from the extreme right to the extreme left. The ruling party, at just under two-thirds majority, is the big-tent but broadly economically leftist ANC; its leader, the Zulu-descended Jacob Zuma, is therefore President of the Republic (Parliament elects the President, who is both head of state and of government). The main opposition party is the Democratic Alliance-considerably more than half of its support now derives from non-whites.[4] A third party, the Congress of the People (also known as COPE, and yes, every joke that can possibly be made already has been) was formed due to an ANC split that occurred in late 2008 after the axing of Former President Thabo Mbeki, and, rather unexpectedly, won 10% of the vote. Besides these three larger parties, there are several dozen smaller parties representing minorities and special-interest groups. Therefore, as in most Parliamentary systems of government, coalitions between parties are very important; stand-offs and close calls between two large parties, as in the American system, just do not happen in South Africa. (Instead, they are liable to occur within the ANC, behind closed doors: the ANC is a rather large tent, including both near-communist leftists and people, like economic wizard Trevor Manuel, who are definitely neoliberal and might well be viewed as centre-right.)

The concept of race in post-Apartheid South Africa is complex and fluid. In addition to black South Africans, which group comprises eighty percent of the total population and contains members of multiple ethnic origins and language groups, there is a considerable minority of white South Africans, who may be of Dutch, British, French Huguenot, Israeli, Greek, Portuguese or German descent, and who remain affected by the English/Afrikaans divide. There are also coloured South Africans, who may be, inclusively, of white, black, Indonesian, Malaysian, Javanese, Arabic and/or Indian descent, and who have an extremely rich and diverse cultural heritage as a result, being mostly Afrikaans-speaking and having a high percentage of Muslims. (Note that the term 'coloured' is not derogatory, but refers to mixed race.) There are also substantial immigrant groups of Indians, whose ancestors arrived in the late nineteenth and early twentieth century as migrant workers, and of people of Arabic descent, not to mention a Chinese population of around 100,000. There are also nearly 150,000 refugees, the majority from sub-Saharan Africa (and several million illegals); many come from Zimbabwe. Contrary to the image most media would portray, racism is still widespread. Current controversies surrounding racism include prominent politician, Julius Malema, who sings a song called "Shoot the Boer" at rallies.[5] Recent years have also seen an upswing in xenophobic prejudice, the chief target of this being the refugees (although its debatable whether you can blame racism for the anti-refugee riots, seeing as in many cases the refugees and rioters were even from the same tribe).[6]

South Africa played host to the 2010 FIFA World Cup, which was widely regarded as a resounding success and has proved to be a landmark event for the country - its only truly unfortunate outcome was to instill in the world at large a perverse fascination with the South African custom of blowing into plastic horns called "vuvuzelas" during matches. South Africa is also a big cricketing nation, and their rugby team, the Springboks, is rather good too (being somewhere in the international top 5 at any given time). JRR Tolkien was born in this country.

Believe it or not, South Africa has allowed same-sex marriages since 2006. Also, according to The Other Wiki, South Africa was the first nation in the world to explicitly prohibit discrimination based on sexual orientation in its constitution. Contrast with most other countries in Africa, especially Uganda.

It's worth pointing out that South Africa did not even get television at all until 1976 (well after most of Africa) - the apartheid regime blocked it for moral and political reasons. Even after that, a boycott by British acting union Equity precluded sales of their programmes for a while and SA was limited to US imports. It's also worth noting that because of the diversity of languages and accents, most foreign actors fall into varying degrees of Fake Nationality with a lot of As Long as It Sounds Foreign and generic "Bulungi" accents, most of which South Africans find absolutely HILARIOUS.