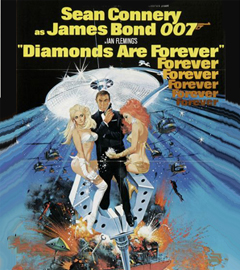 After traveling the world in his quest to kill Blofeld in revenge for the murder of his wife, Tracy, superspy James Bond returns to England only to discover he has another job waiting for him. A huge amount of diamonds have been stolen from the South African mines and two Camp Gay assassins are killing everyone in the smuggling ring ladder, rung by rung.

Bond infiltrates the group by managing to kill smuggler Peter Franks and poses as him in an effort to find out what is going on. He discovers that the head of the smuggling ring is none other than Ernst Stavro Blofeld.

Now, Bond must survive the machinations of Mr. Wint and Mr. Kidd, so that he can defeat Blofeld's sinister plot.

The seventh James Bond film, starring Sean Connery in his last (and least regarded) Eon series appearance. After Bond kills Blofeld in the opening sequence, he is assigned to an international diamond-smuggling case, which is later revealed to be part of a plan by the not-dead-after-all Blofeld to build a Kill Sat and hold the world hostage. Of note, Sean Connery, who was done with the series after You Only Live Twice, was lured back to playing Bond to get a massive paycheck. He used half of it to establish a charity to support deprived children in Edinburgh.

Parts of the first Austin Powers movie are a direct spoof of Diamonds Are Forever, including the Las Vegas setting and the casino sequence, the miniature models displaying the reach of the villain's businesses, and the Room Disservice sneak-attack against the hero at the end of the film.

Tropes used in Diamonds Are Forever include:

The original book has the following tropes:

Retrieved from "https://allthetropes.org/w/index.php?title=Diamonds_Are_Forever&oldid=1962447"
Categories:
Cookies help us deliver our services. By using our services, you agree to our use of cookies.