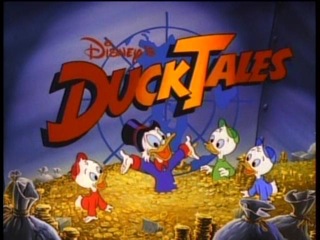 The series that jump started the trend of Disney television cartoons. Inspired By Carl Barks' classic comics (and loosely adapting a few of his plots), the story centers on Scrooge McDuck, the billionaire uncle of famous Disney rage-a-holic Donald Duck. As the series begins, Donald ships out to sea with the Navy, and Scrooge comes into the guardianship of his mischievous triplet nephews -- Huey, Dewey, and Louie -- and gains the one thing he could never buy with his amazing wealth: family.

Also in the cast:

At 100 episodes over three seasons, DuckTales was notably one of the longest-lived of Disney's television cartoons (its predecessor, Adventures of the Gummi Bears, lasted for twice as many seasons, but only 65 episodes total). It spun off a theatrical film in 1990, titled DuckTales the Movie: Treasure of the Lost Lamp. Also, the show's two video game adaptation on the Nintendo Entertainment System, like many other Disney-based games developed by Capcom, were examples of truly good licensed games. See Video Game: DuckTales for the tropes they give examples to.

Of course, even DuckTales has its detractors. Don Rosa hated it to the point of feeling like he was selling his soul by writing one DuckTales comic because he needed the money. Hopefully viewers let the great show work as a gateway for them into the world of the even greater comics.

Speaking of comics, Boom Studios -- the same studio that brought back Darkwing Duck and Chip 'n Dale Rescue Rangers -- also brought back DuckTales, with Warren Spector as the writer. Between Executive Meddling by the people at Boom to rush it out and the Disney licenses going to Marvel Comics, however, the ambitious globe-trotting plot that could have lasted as a Myth Arc was compressed to four issues and rushed as hell; at the very least, though, the brief series will go out in a blaze of glory as it crosses over with Darkwing for the first time since The Legend of the Chaos God.

Oh yeah, one more thing: the theme song will never leave your head. Ever.

Scrooge: Now, keep your peepers peeled for priceless plunder.
Launchpad: Personally, I'd prefer to protect my posterior from predators.
("A DuckTales Valentine")

"Penny for the poor?"
Scrooge: They're not worth it!

Doofus Launchpad says he wouldn't know an asteroid from a...
Nephews Shhh!

Launchpad I'm going to bare my soul.
Huey Can you do that on television?!