What the Hell, Hero? 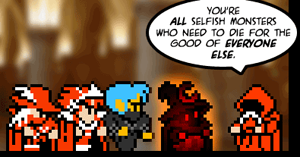 Except Fighter. He's a casualty.

When characters In-Universe call out one of the heroes for doing something clearly unheroic, if not outright heinous.

Occasionally, an author will drop some gray into his otherwise flawlessly good guy hero... and have others notice. This can add guilt and remorse to a character as they feel shame for their evil actions, and legitimately have to fight to restore their name, undo the harm, or simply live with the guilt and shame of it. In this case, you can expect to hear some variation of "Haven't you done enough already?" More extremely, it can be the first step towards Anti-Hero-dom or a full-blown Face Heel Turn. A Redemption Quest is usually considered the most noble or morally good way to respond to this.

It shows the fans that the author knows their hero did wrong, thereby averting Moral Dissonance.

The opposite of Protagonist-Centered Morality; contrast also Designated Hero and Hero Insurance. See also What Is Evil? and Not So Different for when a villain is the one pointing this out, or acting as though there's something to point out to mess with the hero. (A variation is when the villain will praise the hero, which the hero will find profoundly humiliating.)

Almost never applies to those Powers That Be who have an Omniscient Morality License, although characters who Rage Against the Heavens might attempt it. Likewise, villains tend to be immune to this thanks to their It's All About Me attitude (or, at best, Moral Myopia), though a Heel Realization might clue them in, perhaps leading to a Villainous BSOD. (Then again, this trope doesn't really apply to villains who aren't even trying to do anything decent for the world in the first place.) Those pesky Trickster Mentors may also find themselves on the receiving end of Rage Against the Mentor.

Some video games offer dialogue trees or something similar that might allow your character to call someone out for their horrible behaviour, which can be immensely satisfying. If your character is the one being called out, it's What the Hell, Player? My God, What Have I Done? may be a self-inflicted version. Can come right off the heels of a Sadistic Choice foisted on the player in a video game. The hero may attempt to invoke I Did What I Had to Do as his justification, though this does not always succeed. Of course, those who live in glass houses shouldn't throw stones, and one should beware of his own Moral Myopia leading to The Complainer Is Always Wrong. Results may vary against the Sociopathic Hero or The Unfettered; beware you don't get a Shut Up, Kirk or Hannibal Lecture in response.

Important note: This article is exclusively about scenes where the hero is called on his morally ambiguous or directly evil actions by characters in the story. If the Designated Hero is a Jerkass (or worse), but no one calls him on it in the series, then take your example to Moral Dissonance or Designated Hero.

Examples of What the Hell, Hero? are listed on these subpages:
Retrieved from "https://allthetropes.org/w/index.php?title=What_the_Hell,_Hero%3F&oldid=1623586"
Categories:
Cookies help us deliver our services. By using our services, you agree to our use of cookies.