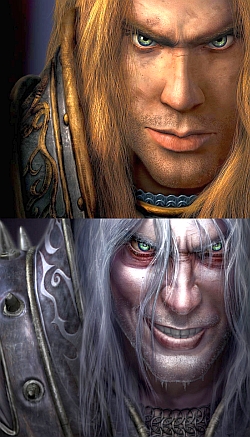 Arthas: from a nice person to An Ice Person.

In Professional Wrestling, a "good" wrestler (a Face) is occasionally tempted by The Dark Side, or just gets fed up, and becomes a Heel. Magazines and other promotional material from the various wrestling "leagues" frequently comment on various wrestlers' changes in "alignment" (in wrestling's fictional plotline known as Kayfabe) nearly as frequently as they actually cover events in the ring themselves. (They even actually use phrases like "Face Heel Turn", though the shorter "Heel Turn" is more common)

A wrestler's heel turn is often a sign that he or she is about to see his or her popularity skyrocket. Indeed, it is very common, once they have turned, to remain heels for their entire careers. Heels that become really popular may end up "naturally" becoming faces again, but it is just as likely for heels to be beloved because they are heels. In fact, as paradoxical as it might seem, a heel turn can help an otherwise despised wrestler become likable: fans may well resent a Mary Sue face character, and may be better able to relate to a character who is profoundly flawed in one way or another (after all, that's what satire is all about).

In other genres, it means "good guy turns bad," the opposite of the Heel Face Turn. Perhaps the former hero(ine) has become a Rival Turned Evil. Perhaps he or she has lost perspective, and became a Well-Intentioned Extremist or Knight Templar, or worse, Jumped Off The Slippery Slope into true villainy. Perhaps something horrible has happened that shattered his or her faith in good, and he or she has become a Fallen Hero. Maybe his or her love for someone turned into a dangerous obsession that went out of control. The hero may have bravely declared "You Shall Not Pass!" or his companions may have found it impossible to ensure that No One Gets Left Behind, but he proved to be Not Quite Dead and, deranged by his suffering, blames his companions for abandoning him. Perhaps he or she has had too many of their good deeds come back to bite them and decided that being a hero is no longer worth it. Maybe he or she has had enough of being pushed around, laughed at and put through hell, or maybe he or she has snapped after one too many rounds of Break the Cutie. Perhaps his (alleged) allies have made his life too difficult, or possibly even out-and-out betrayed him, or maybe she's just gone Drunk with Power. Perhaps fighting evil too long has led to his becoming what he once opposed. Maybe The Corrupter got his hooks into him and over time brought out the worst in him (usually in combination with any of the above factors).

This is the Evil Counterpart to the more common Heel Face Turn and is generally found in a story with Black and White Morality. The many reasons and the probability for a turn are listed in the Sorting Algorithm of Face Heel Turning.

Contrast The Mole: The Mole was always working for the Big Bad from the beginning, whereas a character making a Face Heel Turn was a genuine good guy until their change of heart. Contrast also Forced Into Evil, whereas the character was still a genuinely good guy, but had his own reasons to be on the bad guys' side while still maintaining a good heart, whereas a character who did a Face Heel Turn is a character who not only goes to the bad guys' side, but also become a genuine bad guy at heart. A character Forced Into Evil can be said about halfway doing a full Heel Turn, but not a full turn yet like the ones in this page (given time, they may make a full turn in the future).

In a world full of Brainwashed victims, they may be the one who appears to be but really is Not Brainwashed.

See also Heel Face Revolving Door, Neutral No Longer, Deal with the Devil, We Used to Be Friends and Start of Darkness.

No real life examples, please; Calling real-life people evil is an extremely bad idea. Also, it is too subjective to proclaim that someone has joined the "dark side" in real life.

Examples of Face Heel Turn include:

Retrieved from "https://allthetropes.org/w/index.php?title=Face_Heel_Turn&oldid=1940289"
Categories:
Cookies help us deliver our services. By using our services, you agree to our use of cookies.