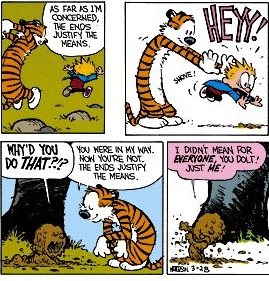 The implicit or explicit code of conduct within a social group whereby the standards of morality stop applying past the fence of their back yard.

They may be royalty, a Proud Warrior Race Guy, The Beautiful Elite, Scary Dogmatic Aliens, Fire-Forged Friends and True Companions Villainous Friendship or not, a close family or fervent patriots, but the attitude is all the same: They are justified in taking anything and delivering Disproportionate Retribution upon anyone who would take anything from them. Lack of Empathy is on full display; everyone else is a nonperson, subhuman, fair game.

If you ever accuse them of being evil and demand that they justify their actions—if they even feel any need to justify something to an outsider—don't expect any remorse about their Dirty Business, or even admissions of villainy, whether regretful or gleeful. These are likely to spit at you that they do not subscribe to your idea of "evil". Particularly blind sorts may even throw in a Holier Than Thou Hannibal Lecture. After all, how many good men would speak against murder as the ultimate evil—but if they found out a loved one committed it, they would make excuses for them and let them get away with it, if they could? And on the other side of things, how many do-gooders actually take into account the lives of minor evil minions that will be necessarily lost on the way to saving the world?

See also Ape Shall Never Kill Ape, A Million Is a Statistic, Moral Dissonance, It's All About Me, and Would Be Rude to Say Genocide. Likely to be a "gray" in Black and Gray Morality, Gray and Gray Morality, or White and Gray Morality. When the writers seem to wholeheartedly privilege the protagonists this way, it's a case of Protagonist-Centered Morality. The Cannibal Tribe may employ this to avoid self-depopulation while also refusing to abandon cannibalism.

No real life examples, please; we'd be here all day. Hell, we've probably all done something like this at some point, to varying degrees.

Examples of Moral Myopia include:

Retrieved from "https://allthetropes.org/w/index.php?title=Moral_Myopia&oldid=1850462"
Categories:
Cookies help us deliver our services. By using our services, you agree to our use of cookies.