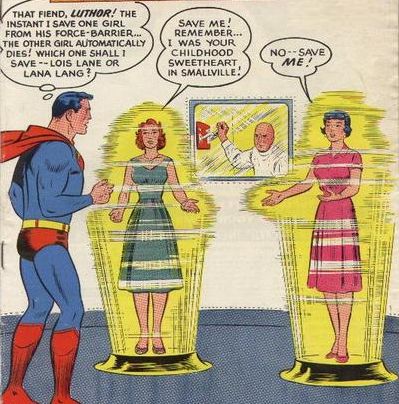 Go for Lana; Lois doesn't even give a reason.

Often called a Sophie's Choice, after that novel and film.

The Big Bad has been engaging in kidnapping, and is willing to make a deal.

In exchange for a powerful device, a bribe, or an agreement, he'll set one of two hostages free.

See, he's got your (crewmate/girlfriend/loving son/mentor/buddy/Sidekick/a Bus Full of Innocents: pick any two), and he's so generous and fair that he'll release one. But he's only going to release one. So, who's more important, and whom are you going to let die?

This is guaranteed to set the Hero into Angst mode, and gives a villain optimum gloating time. Plus, it's fun to watch them squirm!

If the two kidnapped characters haven't been directly at loggerheads with each other earlier that episode (which may lead to a Locked in a Freezer moment for them), they'll represent facets of the hero's life that are in conflict (such as whether his family is more important than his work).

One or both of them will often encourage the hero to choose to save the other.

If the hero is a known expert in daring rescues, the villain will try to make sure he doesn't get any ideas by putting the two hostages in separate Death Traps, then informing the hero he only has time to save one. This is usually the hero's cue to prove how wrong the villain is.

A Sadistic Choice doesn't have to involve choosing between two kidnapped characters. Sometimes, it involves a villain forcing a character to choose between people he or she cares about and some defining cause or ideal that he or she has sworn to uphold, or some other situation in which choosing either option will lead to the loss of something or someone important to the character; for example, forcing a Technical Pacifist to violate Thou Shalt Not Kill or let the people he loves die horribly, or forcing someone to give the villain information that will doom a character or a cause (such as the location of a rebel base or the whereabouts of the character) in exchange for the life or safety of another character or group of characters, or engaging in Leave Behind a Pistol after threatening a horrific death—to a character who believes suicide a serious sin. Many villains in this variant scenario are not above pulling a You Said You Would Let Them Go on the character once the choice is made, just to be a complete bastard.

Given it's such a hard choice, it's no wonder most good guys tend to Take a Third Option. It's practically unheard of for a hero to actually make this choice, and have it carried through before either the villain breaks his promise or the cavalry manage a rescue. If the one offering the choice benefits regardless of what the chooser chooses, its a Xanatos Gambit. If the choices aren't necessarily forced, but something the character must eventually decide on, Morton's Fork has come into play.

Compare "Friend or Idol?" Decision, Hostage for McGuffin, Scylla and Charybdis, Take a Third Option, I Will Punish Your Friend for Your Failure. A classic Moral Dilemma.

Examples of Sadistic Choice include:

Retrieved from "https://allthetropes.org/w/index.php?title=Sadistic_Choice&oldid=1784386"
Categories:
Cookies help us deliver our services. By using our services, you agree to our use of cookies.