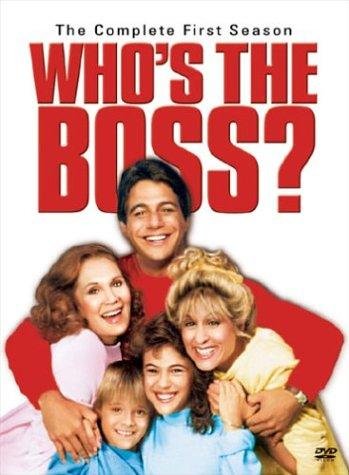 Who's The Boss? was an American television Sitcom starring Tony Danza, Judith Light, Alyssa Milano, Danny Pintauro, and Katherine Helmond. It was broadcast for eight seasons on ABC from 1984 to 1992. The show debuted on the same day as NBC's The Cosby Show in 1984.

Widower Anthony Morton "Tony" Micelli (Danza) is a former second baseman for the St. Louis Cardinals who was forced to retire due to a shoulder injury. He wanted to move out of Brooklyn to find a better environment for his daughter, Samantha (Alyssa Milano). He ended up taking a job in upscale Fairfield, Connecticut as a live-in maid for divorced advertising executive Angela Bower (Judith Light), and Tony and his daughter move in to the Bower household.

This series contained a number of role reversals unusual for the time period, such as a domestic setting where the woman was the breadwinner while the man stayed home and maintained the household. Additionally, the role of Angela's mother Mona as a sexually active older woman was quite unusual then. Also well known for its use of UST; the very slow-building romantic relationship between Tony and Angela was quite a rarity at the time.

Tropes used in Who's The Boss? include:
Retrieved from "https://allthetropes.org/w/index.php?title=Who%27s_The_Boss%3F&oldid=1748415"
Categories:
Cookies help us deliver our services. By using our services, you agree to our use of cookies.