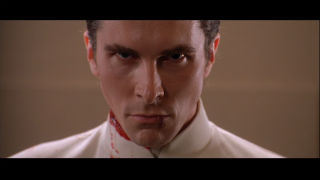 For the record, that glare is his standard face for most of the movie. His actual level of anger is expressed by how dreadfully he kills you.

In every Badass's life, there may come a time when going berserk simply does not work. In this case, many people choose to turn to Tranquil Fury. This state of mind allows much whoop-ass to be uncanned without undue stress. When the time comes for the showdown between the Hero and the Big Bad, do not expect to see furious angry rage. Instead, expect The Hero (or Anti-Hero)'s face to be serenely, eerily calm. They will not appear to be even slightly put out with the villain. Of course, that won't stop them from trying to hack the villain to hundreds of tiny pieces. A defeat by someone in the grip of Tranquil Fury is likely to be more comprehensive than others, as the job will be done in a properly thorough fashion.

This is different from The Quiet One and The Stoic. The character in the grip of Tranquil Fury isn't necessarily an emotional cripple, and in day to day life they may be perfectly normal and happy. What defines Tranquil Fury is the tendency to become deadly serious when it gets deadly serious.

Tranquil Fury is often preceded by the phrase "I didn't want to have to do this," or something similar. A loose real-life equivalent would be the concept of mushin. Typically, a Meditation Powerup invokes or results in such a state.

Examples of Tranquil Fury include:

We're not shown the ensuing fight, but it wipes out the.[1]

Retrieved from "https://allthetropes.org/w/index.php?title=Tranquil_Fury&oldid=1949644"
Categories:
Cookies help us deliver our services. By using our services, you agree to our use of cookies.