Everything About Fiction You Never Wanted to Know.
(Redirected from Yu-Gi-Oh (Tabletop Game))
Jump to navigation Jump to search 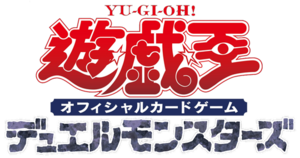 The Yu-Gi-Oh! Card Game is a trading card game based on in the manga of the same name authored by Kazuki Takahashi and manufactured by Konami. It first appeared in the manga as a Homage to Magic: The Gathering, of which Takahashi is a fan. Originally, the manga was intended to feature a new game every few weeks, with the trading cards being just one of many. However, Takahashi received a lot of fan mail asking how to play it, and so he cobbled together a rudimentary game system loosely based on that of Magic which generally agreed with how the characters played. Fan mail kept pouring in, and so the editor of Shonen Jump (in which the manga was serialised) persuaded Takahashi to rework the premise of the manga to be about the cards.

As the manga proved to be a smash hit, two companies (Bandai and Konami) wrestle the rights to adopt the future franchise empire, each with their own takes on the game. The latter won the rights, and was approached to produce a real version of the game called Yu-Gi-Oh! Official Card Game (OCG for short), which was released in 1999. The OCG made considerable changes to the rules originally established by Takahashi, and so the then-ongoing manga and the later animé produced by Nihon Ad System were revised to more closely reflect the rules set by the OCG.

Yu-Gi-Oh! is essentially a game with different names and administration structures in different territories. The aforementioned Official Card Game has been handled by Konami since the beginning; it administers Asian territories, which include, but not limited to, Japan, China, Hong Kong, Taiwan, South Korea and Southeast Asia. The other administration setup, the Yu-Gi-Oh! Trading Card Game (TCG for short), administers the rest of the world, mainly Europe and the Americas. The TCG was originally manufactured and distributed by Upper Deck Entertainment, at Konami's own behest. However, in 2008, UDE lost the license amid some allegations of wrongdoing, and now the TCG is administered by Konami as well. The game is roughly 99% identical on each side of the Pacific - the only differences are that there are some cards that debut on one administration, but not the other, for a good while. Konami also alters some card artworks for the TCG to prevent incidents with Moral Guardians, although they seem to have lightened more with this in later years, and even released some of the old "lost arts" as special promotions.

Some of the core gameplay elements are as follows:

A more complete overview of the rules can be found at this Useful Notes page.

In 2020, Konami released Yu-Gi-Oh! Rush Duel as a sister product. A simpler card game derived from this one, it caters mostly toward children and old-timers who are seeking lighter, simpler form of card game.

For the card game based off the first anime, try Yu-Gi-Oh! (Carddas Version).

Tropes used in Yu-Gi-Oh! (Tabletop Game) include:
Retrieved from "https://allthetropes.org/w/index.php?title=Yu-Gi-Oh!_(Tabletop_Game)&oldid=1920610"
Categories:
Cookies help us deliver our services. By using our services, you agree to our use of cookies.