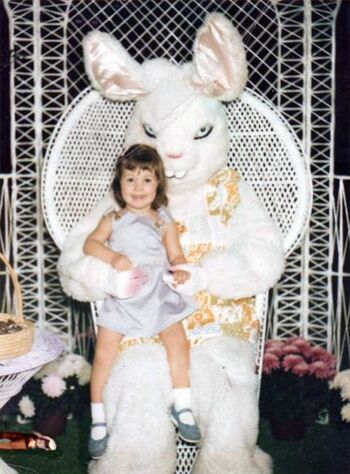 Sure, she's not scared now, but how is she going to react when she sees that photo?
(See more images on Image Links Wiki.)

Accidental Nightmare Fuel refers to things in media that scare people even though they were never meant to. Something that was meant to amuse or entertain to the audience would otherwise result in frightening people to the point of having nightmares. It's particularly common in media aimed at children and general audiences, as kids (usually) get scared more easily than adults, but can be seen pretty much anywhere by anyone, due to the extremely subjective nature of horror.

In short: It wasn't intended to be scary, but it turns out to be anyway.

The usual suspects of Accidental Nightmare Fuel include:

There is an excellent discussion about this phenomenon and its possible psychological origins in this blog post at The Onion A V Club. And check out the website Kinder Trauma — if you dare.

Contrast with Nightmare Retardant and Narm. If the offending material can make you sick, you've got Nausea Fuel. For deliberately scary (but not very scary) kids media, see Defanged Horrors. If a villain that causes this is in a show far more light-hearted than one would expect that sort of character to appear in, then it's Vile Villain Saccharine Show. Contrast Faux Horrific (it's not scary, but played up as if it is). If it becomes scary only in hindsight, it's Fridge Horror.

This is a Fan-Speak definition. Please put examples in Nightmare Fuel

Retrieved from "https://allthetropes.org/w/index.php?title=Accidental_Nightmare_Fuel&oldid=1947615"
Categories:
Cookies help us deliver our services. By using our services, you agree to our use of cookies.