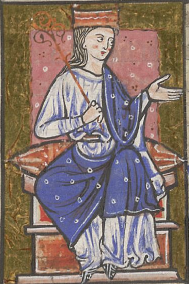 Aethelflaed is a little known but remarkable and interesting historical figure. She was something of an Anglo-saxon Joan of Arc during the dark days of the Danish invasions.

Aethelflaed was the oldest daughter of Alfred the Great . She was married to Aethelred, Ealdorman of Mercia in an effort to seal the merger of the remaining Anglo-Saxon kingdoms into, well,"Angleland"-now known as England . Aethelred was apparently sickly through much of his term and Aethelflaed appears to have been the woman behind the man in Mercia and became the Unexpected Successor after her husband's death. In partnership with her brother Edward, King of Wessex, she led campaigns culminating in the Battle of Tettenhall which stopped the Danish advance and began the reconquest of the Danish territories.

Retrieved from "https://allthetropes.org/w/index.php?title=Aethelflaed&oldid=1163879"
Categories:
Cookies help us deliver our services. By using our services, you agree to our use of cookies.