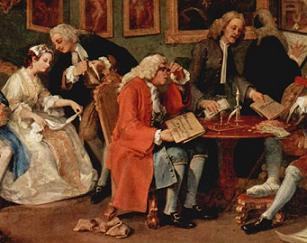 An Arranged Marriage is, quite simply, the idea that someone is going to choose your spouse for you.

The choosing process can work in several different ways:

The idea of an arranged marriage is anathema to Westerners. "What happened to freedom," they ask, "and what happened to The Power of Love, and True Love's Kiss? People should Marry for Love!" The answer is that this is one situation where it was better to be poor. It's easy to forget that history is by and large written only about the rich, and that in most countries well over 90% of the population were either peasants, slaves/serfs, or dirt-poor townsmen whose lives have for the most part been unexplored (or, in the past, deliberately ignored) by historians. These people didn't have arranged marriages because they had no reason to: they owned no property, titles, or status to hand down, they didn't need to make alliances, and they had no long-held traditions to uphold. The poor married for love or infatuation or to legitimize children (although often their form of marriage was what we would consider cohabitation), but this all happened well under the radar.

For anyone with land, money, wealth, titles or any other inheritance they wanted their children to hold, the Arranged Marriage was the way to go. It was more of a business arrangement: two families would agree to a mutually-beneficial exchange, and seal the pact with grandkids. Compatibility was not disregarded (after all, an alliance works better if it isn't held together by a Crack Pairing), and love was held in high esteem... but it was considered a product of marriage, not a cause, which should be born from long familiarity with one's spouse: Ten Minutes in the Closet, except over the course of a lifetime. (See The Makioka Sisters for an example.) Finally, the Perfectly Arranged Marriage, the love-child of the Arranged Marriage and Love At First Sight, was developed by ancient tropers in acknowledgement of the fact that love is a desirable part of a marriage. But the thing about these arranged marriages was that they weren't between a husband and wife: they were between two families, with the husband and wife simply being the ones who formalize it. Love can be fleeting, but family is eternal and fortune precarious; The Needs of the Many must take precedence.[1]

In most instances where a formal Arranged Marriage is introduced into a plot, it will become a source of tension and contention. Most people don't really want to marry a total stranger (much less have sex with them), and if that total stranger turns out to be a complete rogue and a cad, it may be necessary for the heroes to spring into action and rescue the hapless member of their group who is being forced to walk down the aisle. (Of course, being Big Damn Heroes, they'll have to do so in the most overblown and dramatic way possible.) Sometimes, the person in the arranged marriage takes matters into their own hands and becomes a Runaway Fiance.

Conversely, in a Romance Novel, an Arranged Marriage can be used as a technique to lock the hero and heroine together so that their disputes can not end with one of them washing his hands of the other.

A common tactic is for the daughter of a wealthy but common family to be matched with the Impoverished Patrician, for his title. Occasionally, it's the other way around, with a titled daughter and a moneyed son.

The Arranged Marriage is not to be confused with: a Childhood Marriage Promise (whereby a prepubescent couple voluntarily pledges their own non-legally-binding, future troth); a marriage which may arise out of convenience; or a marriage that arises from some kind of cultural mistake. For clarity's sake, the Arranged Marriage trope will deal only with more binding, traditional types of unions.

See also Parental Marriage Veto, You Have Waited Long Enough, and Old Man Marrying a Child. A Shotgun Wedding is a short-notice forced marriage. If someone agrees to an Arranged Marriage but loves someone else, Courtly Love may be involved. If the people doing the "arranging" in the marriage aren't the parents, that's a Bureaucratically Arranged Marriage.

Often involves Prince Charmless and Rebellious Princess. At least recently, one of the potential spouses was as likely as not to try to defy this. When the audience really doesn't want this marriage, expect the Big Damn Heroes to show up right at the Speak Now or Forever Hold Your Peace line.

Very much Truth in Television for many time periods and even a lot of countries today, though usually without so much drama.

Examples of Arranged Marriage include:

Retrieved from "https://allthetropes.org/w/index.php?title=Arranged_Marriage&oldid=1937439"
Categories:
Cookies help us deliver our services. By using our services, you agree to our use of cookies.