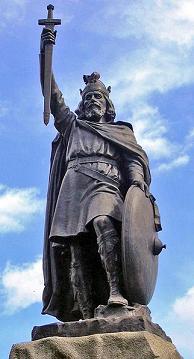 A Victorian Image of Alfred in Winchester

Alfred the Great was one of the most venerated rulers in British history, the only one to received the title "The Great." He was born the fifth son of Aethulwulf, king of the obscure, semi-civilized Anglo-Saxon kingdom of Wessex (roughly, southwestern England from about Berkshire to Devon). He took the throne after the death of his father and brothers. During his reign, he held off the Viking invaders. He also was helpful in standardizing the laws and customs of the realm and encouraged learning. He even personally wrote commentaries on ancient literature. His small realm was to become the cornerstone of what is now Great Britain.

And what's he remembered for? Burning some cakes. Typical...

Alfred the Great provides examples of the following tropes:
Works In Which King Alfred Appears Include
Retrieved from "https://allthetropes.org/w/index.php?title=Alfred_the_Great&oldid=1333769"
Categories:
Cookies help us deliver our services. By using our services, you agree to our use of cookies.