Atop the Fourth Wall 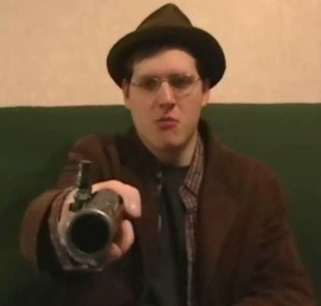 He has a magic gun! Where'd he purchase that?

Meet Lewis Lovhaug, AKA Linkara: an 'eccentric' comic book fan with a Nice Hat who reviews horrible comics. He started out writing text reviews of various comics on his blog Atop the Fourth Wall. However, when doing a three part review on Smoke and Mirrors, one of the low points of The Clone Saga, he decided to finish off with a video review as an experiment. This new format turned out to be popular with his readers (and easier on him), so he continued to make videos. Eventually he ended up joining That Guy With The Glasses and has had many cameos in, and several crossovers with, a few of That Guy With The Glasses characters and their series.

In addition to his reviews of bad comics he has also completed a Let's Play of Star Trek Voyager: Elite Force, starring the unfraggable Ensign Munro. He and Iron Liz, his former girlfriend and occasional co-operator, also post vlogs of themselves playing Card Games such as Yu-Gi-Oh! and Sailor Moon in You're Such a Card...Game!

He is currently producing the History of Power Rangers series, in which he looks back at the franchise (ALL of it) and gives a serious but very informal overview about its elements[1].

Apart from his work at Atop the Fourth Wall Linkara has appeared in an episode of Yu-Gi-Oh the Abridged Series as well as provided a voice for Dragon Ball Abridged. Linkara is not only a critic but also a writer, creator of the webcomic Lightbringer, several graphic collections in the Angel Armor series, and indie title Revolution of the Mask. His most prolific co-operator is Spoony of The Spoony Experiment, with frequent crossovers, guest-stars and stories interchanged between the two shows.

In addition to our intrepid reviewer, AT4W features an wide gallery of recurring characters who are profiled on the cast page.

The series does have a plot, and the episodes you need to see to understand it are listed here for your convenience. For those looking for a medium-sized summary of the plot from an outside source, find a plot guide here. Has a Wikia here. A list things reviewed by Linkara is available here.

Tropes used in Atop the Fourth Wall include:
Retrieved from "https://allthetropes.org/w/index.php?title=Atop_the_Fourth_Wall&oldid=1734193"
Categories:
Cookies help us deliver our services. By using our services, you agree to our use of cookies.