Kill It with Fire 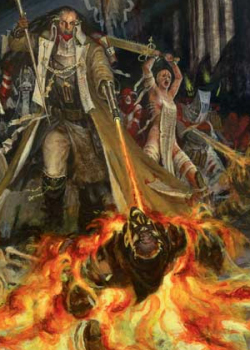 SUFFER NOT THE UNCLEAN TO LIVE.

Prometheus did not just give humanity the light of reason, progress, technology, and the power to rival God when he handed us fire, but the means to dispatch just about any monster imaginable. Considering how Greek Mythology is a Fantasy Kitchen Sink, that was a good thing. The symbolism behind this has to do with fire's associations with purification and Light Is Good, and partly because it represents humanity's dominion over the natural world. More literally a burning stick was humankind's first effective defense against nocturnal predators.

Also, in a pinch, it can still burn things, or at least scare them off. Arrows on Fire, Flaming Swords, flamethrowers, or good old Torches and Pitchforks can work wonders when dealing with everything from Frankenstein's Monster to Complete Monster to a Monster House.

This is prevalent not just in myth and fiction or games based on it, but also in works that are completely new and unrelated. For example, the Hydra and Trolls demonstrate one of the most frequent, and logical, applications for anti-monster fire: It prevents regeneration. In the case of The Undead, usually they're too dumb and slow to put it out (zombies), it reminds them of the sun (vampires), or they're already walking kindling (mummies). Aliens, of course, can be Immune to Bullets but will burn up nicely in fire and not go into Body Horror or Biological Mashup. Witches and heretics for a long time were considered to be in league with evil as well, and so it was a common myth that they were dealt with in the same manner.

You know what the best part of Kill It with Fire is? It works on regular people wearing masks too. Kind of like decapitation (which also works on most things) and a stake through the heart.

If something's too big or tough for a regular fire, you can always use plasma or Hurl It Into the Sun. This has also been subject to Memetic Mutation, as an alternative name for Brain Bleach.

A character who's a little too enthusiastic about using this can become a Pyromaniac.

See also Incendiary Exponent, Man On Fire, Burn, Baby, Burn, Fire-Breathing Weapon, and Hellfire. Compare Stuff Blowing Up, and Playing with Fire - for when someone has fire as a Stock Superpower. When this just makes things worse, see Infernal Retaliation. The less-used opposite is either Kill It with Water or Kill It with Ice, or even Heal It with Fire.

Examples of Kill It with Fire include:

Retrieved from "https://allthetropes.org/w/index.php?title=Kill_It_with_Fire&oldid=1894979"
Categories:
Cookies help us deliver our services. By using our services, you agree to our use of cookies.