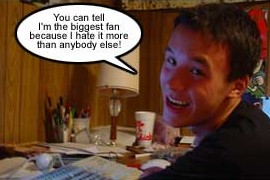 A good fandom is successful by having a diverse community of people who share a mutual interest in the shared object of the fandom, but nevertheless remain mature and sensible enough to tolerate and respect differences of opinion. Most people in fandoms actually are like this.

Then there's Fan Dumb. Fan Dumb is the underbelly, where Serious Business becomes obsession. They are the fans who claim to be the watchdogs of their fandom, but in reality, they're the rabid dogs that need putting down (it's tempting to say literally).

The key characteristics of a Fan Dumb tend to be someone with an over-developed sense of entitlement and/or victimization and (usually) an under-developed sense of humour or perspective about the subject of their fandom, coupled with an obsessive level of an interest and (frequently) some rather irrational views on the whole thing. They usually believe that the very fact that they are a fan of something either entitles them to special or exclusive treatment or that they are being persecuted by numerous different parties (the creator, the producers, other fans, the world at large, etc) because of their fandom.

They are nearly always someone who has completely lost perspective on exactly how important or special the show, the fandom and their views on same is in the scheme of things, and don't understand why others don't feel the same as they do. As a result of all of this, they tend to view even polite or minor disagreement with them and their views as a personal attack, which often leads to them adopting an irrationally combative, defensive tone towards others; in discussion, they will usually resort to unrelated ad hominem attacks on others and place value judgments on them, not their arguments—expect snide comments about race, gender, sexual orientation, age, etc. ("Oh, you just think that because you're black/female/gay/old....!") And any jokes made about the subject of the fandom (or them) will be responded to either with out-of-proportion offence or a humourless deconstruction of why the joke is 'inaccurate'.

The end result of all this is someone who believes passionately that they're the champion elite of the fandom, guarding and preserving what makes it special, whilst ultimately contributing little of any actual value to the property or the fandom, even contributing to its ruining in the process. As a general rule of thumb, the phrase "True Fans" (or some variation thereof) being thrown around is an identifying signal that you're dealing with Fan Dumb, particularly if it's being self-applied; the subtext (or text), of course, is "I'm a True Fan, and you're not."

Although a Fan Dumb often holds idiosyncratic views about the show and demonstrates a passionate interest in it, it is important to note that neither controversial views or intense interest are themselves indication of Fan Dumb; differing viewpoints are inevitable in a large gathering of people (and knee-jerk objection to a differing opinion simply because it's a differing opinion is often a good sign that you belong in Fan Dumb yourself), and most people join fandoms in the first place because they're passionate about something and they want to celebrate it with other people who find it special. Many people manage to hold contrary or passionately enthusiastic viewpoints whilst still remaining civil and decent; similarly, many dismissed as Fan Dumb hold views that, on the surface, are actually quite reasonable. The problem with Fan Dumb is not the level of interest or the viewpoint, but the way it is expressed; even a reasonable argument will sound insane if it's being screamed in someone's face.

Taking these fans too seriously is usually a mistake. Although they tend to be louder than the rest of the fanbase combined, they are usually a decided minority in almost every fandom (though they often claim to be a majority). Fan Dumb also tends to suffer from an extreme case of Fan Myopia, regardless of what kind they are; in any variation, they are often intractably convinced that the views of "the fans" (or perhaps more accurately, their personal views, which they tend to confuse with the views of fandom as a whole) are both more widespread and more mainstream than in fact they are. If you're a producer, then pandering to them is usually a good way to make your show crash and burn. And to add insult to injury, they usually won't be very grateful that you were thinking about them, but will instead start whining about how you made the show crash and burn.

See also Single-Issue Wonk. A specific example is Die for Our Ship. Fan Dumb is a number one contributing factor to both Artist Disillusionment and Fan Disillusionment. Although often a minority, the shrill obnoxiousness of this kind of fan has nevertheless permeated enough people's impressions to construct the stereotype of the Straw Fan. Can be confused easily with a Troll, but, as a rule of thumb, bear in mind that a Fan Dumb is NOT a Troll. See also Unpleasable Fanbase and Broken Base for the massive versions of this.

Compare with Viewers are Morons. Contrast with Hate Dumb, although the two have been known to spawn one another.

Sadly, every fandom has to and/or has had to deal with this and all of its variations...no matter how much they deny it and how much they wish this problem didn't exist. Trust us, these people even annoy the makers of the shows that you like as much as they annoy the rest of us. Don't worry, Fan Dumb are usually just a Vocal Minority. Keep that in mind if you decide to put this as an example to any media or see this in any media here. Most of them, including yourself (unless you actually do fit this and you know if you are) are not complete and utter morons and just want to enjoy it like everyone else.

As a footnote, to a devoted member of the Hatedom, any form of Fandom appears like Fan Dumb. Fan Dumb and Hate Dumb are light and darkness in these regards in that one cannot exist without the other (and that in this case they're usually as equally bad as each other).

Do not list or pothole to this on a work's main page. Put it on the work's YMMV page. If the work doesn't have YMMV page yet, make it.

Common Fan Dumb variants include:[1]
Retrieved from "https://allthetropes.org/w/index.php?title=Fan_Dumb&oldid=1712381"
Categories:
Cookies help us deliver our services. By using our services, you agree to our use of cookies.