That Guy With The Glasses 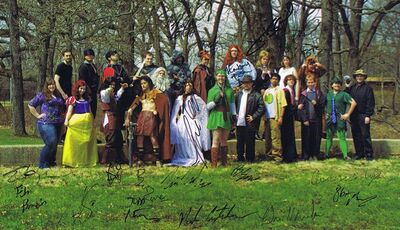 Doug Walker is That Guy With The Glasses, part of Channel Awesome. Best known for being The Nostalgia Critic, a somewhat cynical man who reviews some of the shows and movies we grew up with in The Eighties and The Nineties. There's stuff like Pokémon the First Movie, Mighty Morphin Power Rangers, Drug PSAs, and the infamous Batman and Robin. He also has other features on his site, such as "Bum Reviews", in which another of his characters, a homeless guy named Chester A. Bum, "reviews" recently released movies. Another is the "5 Second Movie" series in which he edits together a very brief collection of clips from the given movie to give an overall summary. For instance, he summarized The Matrix thus:

He's also notable for a "rivalry" with The Angry Video Game Nerd which was chronicled in 5 of his videos (which some fans took a little too seriously). It (temporarily) climaxed as a brawl between the two (with Captain S joining in for no apparent reason). Then each had to "do the other's job" and review a terrible video game/nostalgic movie. The Critic seemed to come off worse (i.e. he suffered more) in his review of Bebe's Kids. He ultimately challenged the Nerd to a fight to the death that occurred on October 10, 2008. The fight ended with the Nerd victorious, although it foreshadows the Critic's return, even finishing with "The End?" on screen.

There has been a reprise video that turned into a Massive Multiplayer Crossover, Gamers Vs Critics, showdown of awesome. It is known as the TGWTG anniversary brawl. Later, the Critic and the Nerd teamed up to review an awful Teenage Mutant Ninja Turtles concert video, but their hostilities seemed to rekindle at the end.

In addition to his own videos, Walker also hosts a number of other pop culture reviewers on his site. You can find a list of most of them (or at least the ones we tropers remembered to add) here.

The site spun off into Blistered Thumbs in November 2010, for gaming-centric videos and article. It shut down in January 2014.

Contributors who have left Channel Awesome get their pages and videos deleted off the site.

Please restrict examples from the following shows to their respective pages, unless they're from non-anniversary special crossover videos.

Tropes used in That Guy With The Glasses include:

Retrieved from "https://allthetropes.org/w/index.php?title=That_Guy_With_The_Glasses&oldid=1867485"
Categories:
Cookies help us deliver our services. By using our services, you agree to our use of cookies.