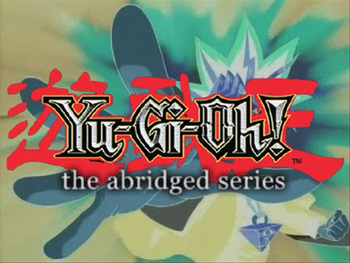 Yu-Gi-Oh!: The Abridged Series (The Cancelled Series for the Virtual World arc) is a Gag Dub and Affectionate Parody of the second anime series of Yu-Gi-Oh! (the one most commonly known around the world), done by a guy known as Little Kuriboh (real name Martin Billany). Each episode of this series compresses several clips of YGO episodes into four- to eleven-minute clips, which point out and make fun of some of the really absurd plot points of the series (just how does Kaiba manage to climb that cliff with a briefcase in his hand?) and a lot of the changes made in the 4Kids dub ("Don't move a muscle, or we'll shoot you with our invisible guns!" "It is heavily implied that you are beating the ever-loving crap out of me!"), as well as lampooning the policies of the television networks that aired the show in North America.

The Abridged Series spawned a handful of imitators, but has since become an entire genre of internet videos and thanks to its expressive Post Modernism, quotes from the series are repeatedly used on this very wiki. As well as by a few of the actual voice actors. In 2009, Martin and his show became an official partner of That Guy With The Glasses.

After some time Little Kuriboh eventually went to doing the same process with "Season 0" (the Short Runner based more closely on the original manga), giving special attention to the Adaptation Displacement and animation quirks of the earlier series.

Videos of each episode can be found at the official website or Daily Motion. Transcripts of the episodes can be found here. The YouTube account has been terminated and reinstated eight times. By NAS/TV Tokyo bots, no less.

There are so many Shout-Outs in this series that it got its own page.

Retrieved from "https://allthetropes.org/w/index.php?title=Yu-Gi-Oh!:_The_Abridged_Series&oldid=1647336"
Categories:
Cookies help us deliver our services. By using our services, you agree to our use of cookies.