Everything About Fiction You Never Wanted to Know.
Jump to navigation Jump to search
/wiki/Bo Diddleycreator 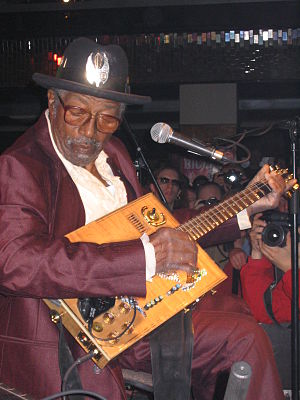 Copied from "Music of Note:" He was known as "the Originator" for being one of the first artists to start playing Rock & Roll. The Beatles cited him as a favorite, and Hendrix and Clapton were directly inspired by him. His most famous contribution was the "Bo Diddley Beat" that rock bands the world over still use.

He famously made his own, distinctively rectangular, electric guitars. They have a distinctive, almost ukelele-like tone color, easily recognizable and closely associated with Bo Diddley Beat-type music.

He also served for some time as a deputy Sheriff.

Bo Diddley is the Trope Namer for:
Discography:

Retrieved from "https://allthetropes.org/w/index.php?title=Bo_Diddley&oldid=1778663"
Categories:
Cookies help us deliver our services. By using our services, you agree to our use of cookies.