Everything About Fiction You Never Wanted to Know.
Jump to navigation Jump to search
/wiki/Eric Claptoncreator 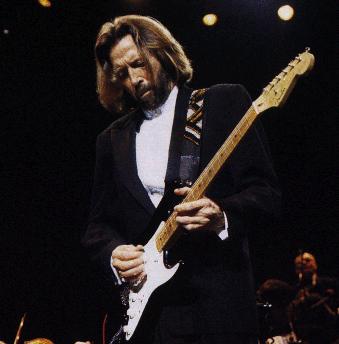 Just call him Slowhand. Eric Clapton, CBE, is one of those artists who can find great success in his solo efforts or as part of a band. He ranked second in Rolling Stone's list of the 100 Greatest Guitarists of All Time. He's played a variety of genres, from blues to psychedelic to pop and even reggae numbers. His influence is felt across pop, blues, and rock, with multiple chart and critical successes.

Clapton has been part of numerous bands throughout his career. His first group was The Yardbirds, who he was with for 2 years from 1963 to to '65. It was during this time in his career he gained the nickname "Slowhand," coming from his habit of changing the strings on his guitar on-stage in concert whenever they happened to break. While waiting for him finish the process, the audience would engage in a "slow clap," and thus his nickname was born (although other sources suggest a more complementary story; he got the nickname for his trademark wide, slow vibrato). After his time with the Yardbirds, he briefly joined John Mayall & the Bluesbreakers, but left after a few months. He only recorded one album with them nicknamed Beano, but it was a legendary one. The whole Clapton Is God thing started with the release of this album. How important was it? Judge for yourself, but Jimi Hendrix said it was his biggest inspiration.

It was in 1966 that Clapton joined his first supergroup: Cream, with Jack Bruce and Ginger Baker. Cream brought Clapton his first success in America with the songs "Sunshine Of Your Love", "White Room" and "Crossroads." They were also legendary for their long jams and high musical capability. Back when they existed, they were the top selling live act, beating out Hendrix. Clapton then played in a few smaller bands, none lasting very long, before forming his own ensemble, Derek and the Dominoes. There he had his next big hit, "Layla." After the band's disintegration, Clapton finally went solo. Two of main hits on his own, "I Shot the Sheriff" and "Cocaine" were both covers.

One of his most notable performances came in the early 90s on MTV's Unplugged series. There he performed acoustic versions of "Layla" and "Tears in Heaven," which was written in grief after his son's death in 1991.

Clapton has the distinct accomplishment of having made guest appearances on solo albums released by all four ex-Beatles over the years; John Lennon's Live Peace In Toronto and Sometime In New York City; Paul McCartney's Kisses On The Bottom; Ringo Starr's Ringo Rama, and numerous George Harrison albums, as well as a Beatles group album (The White Album, contributing the solo to "While My Guitar Gently Weeps").

Eric Clapton provides examples of the following tropes:
Retrieved from "https://allthetropes.org/w/index.php?title=Eric_Clapton&oldid=1850853"
Categories:
Cookies help us deliver our services. By using our services, you agree to our use of cookies.